Okay, my dears. So I finally did the two tarot spreads I’d been promising myself I’d do since last week’s Kick in the Pants.

Yeah. This is gonna get long – my tarot posts usually do – so I’ve put it behind a cut.
What I did:
I started with a “Mirror” spread, and followed it up with a “Key” spread. I found them both in the Little Guide Book that comes with my “Game of Zen” Tarot deck

, and I find they work well together in this instance.
See, the “Mirror” spread is supposed to be used when you’re wondering about how a partnership (as in: with another individual) is going to go. If you do a lot of Romance Readings, this is a handy one to have in your trick bag, if you will. But it’s also good if you need to get a handle on parts of yourself that you’ve been ignoring or avoiding. It’s called the “Mirror” for a reason, y’all. 🙂
The “Key”, on the other hand, can – if you read it right (and this was my first time using it, so… um?) – give you a means, or at least a path, to get you where you’re going.

So. What did I get?
Well, given what promted the reading in the first place, I don’t think anyone is going to be surprised that I got “Ice-olation” or “Letting Go” in my Mirror spread.

I Love it When They Speak Clearly. 😀

But, beyond that, here’s what my Mirror spread looked like (we’ll get to the Key spread later):

I hope you can forgive my shoddy photoshopping, but I wanted to give you a shot of the whole thing at once. The breakdown is as follows:
The left-hand column is “Self” while its reflection, the right-hand column, is “Other(ed)” – in this case, the part of me that I’ve been keeping locked up for an age and a half. Fromt he bottom up, they both go “Body, Heart, Mind” and you’re meant to read them as pairs across the mirror glass of the union.
The middle two columns – the glass – are where Self and Other(ed) come together – the union of opposites, or the alchemy of the soul, or whatever you want to call it – both the outward manifestation and the internal changes that will happen because of it.
The upper right corner, of course, is the addition that I picked up from a friend of mine – the Advisor Card plus the over-arching and underlying influences.

Now I’ve done my own longer analysis, but the short(er) version is that some of this stuff is a bit of a “no kidding” moment – Like the “Supression” card for my Shadow-side’s “mind” position, the “Control” card sitting in my Upper Self’s “body” spot, the Advisor card being “Flowering”, or the entirety of my Upper Sepf column being Air cards. Seeing “Harmony” as my supressed shadow-body (although when I saw it… you guys, I seriously burst into tears[1]). Other elements were unexpected:
That my Shadow’s “heart” card was “Mind” (the Page of Air/Swords), for example – which could, I think, be read to mean that my Shadow-Self’s heart (my wild heart?) is being choked out or overpowered by my Control-Brain.
That my (outer manifestation) benefits of this union are represented by… the Queen of Swords (in my deck she’s called Morality, but she has a pretty crappy reputation as a Mean Girl no matter what deck you’re using).
That my Upper Me “heart” card – the Ten of Air – is a bit of a clue to stuff in both this spread and the Key spread I did alongside it.

The “mirror glass” columns are also meant to be read as a series of pairs, and I had question about some of them, too.
For example, while the pairing of “Playfulness” with “Understanding” makes sense on a couple of different (but related) levels – that I allow myself to be more playful (joyful, spontaneous, less likely to listen to my Shame Brain telling me I’m not good enough to, or am too full of myself if I, try to do X) and am more understanding of myself, in those moments of integration AND that Play is the outward key (and… compassion, I think… in the inward key) to making that integration happen and happen reliably.
BUT – while the above makes a lot of sense – the Transformation and Benefits pairs are harder to understand on a gut level. I don’t entirely get how the Queen of Swords – and being her in an outward way, no less – is a blessing (Miss Sugar, this is totally linked to the stuff that you’re Festering on, fyi), and I’m not sure how “Exhaustion” (the 9 of fire/wands) is linked to “Letting Go” (the 8 of water/cups), particularly in terms of Transformation (not “one into the other” but “this union will transform you outwardly in this way, and inwardly in this other way”). I’m open to suggestions, y’all.

My Advisor card is kind of a no-brainer (and always a nice one to see), but my overarching and underlying influences aren’t all that surprising either. I know that underly this particular struggle – possibly on a number of levels – is my fear that “nobody will take care of me”. The Miser is a very, very familiar character – I wear her under my skin, pretty much constantly, in that regard. Patience, on the other hand, is… reassuring. I spend a lot of time fretting that I’ve already run out of time to do X, Y, or Z. On one level, that’s a perfectionist’s avoidance tactic built on pre-emptive regret, but… beyond that. I’ll be 35 in November. I’m coming up on my next Seven-Year Cycle and there’s a big part of me going “How the fuck long is this going to take???” I mean, I’ve be at this for fourteen years. Trying to repair whatever damage was done, or that I did to myself, during the fourteen years before that[2]. Hoy.
So the caution that This Will Take Time, and also that if I just chill about that bit rather than trying to, I dunno, “finish the test quickly” or something, I’ll be a lot more likely to wind up with that juicy, joyful, rooted, mature and com/passionate Flowering that I’m aiming for… that’s helpful to see, as a memory-jog if nothing else. 🙂

Anyway. That’s the “short” (haha) verison of my Mirror spread.
This was followed by my Key spread: 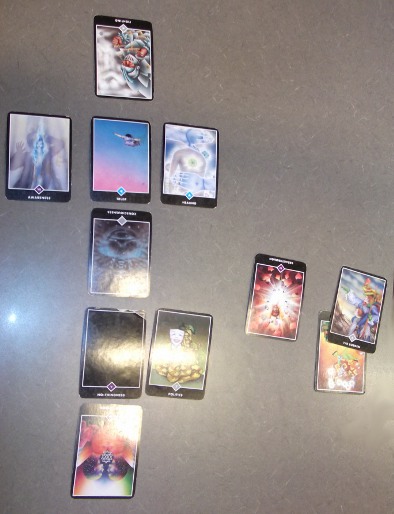 Okay. So the Key spread is specifically talking about a Repressed part of oneself. Given that I already know that the Repressed part I’m looking at/for is My Shadow… I’m kind of fascinated/amazed that the card I pulled for Position One (“What Is Repressed”) is… The Lovers.
What?
Huh…

Yeah. It’s not entirely out of line, given the whole Harmony thing from the last spread. This is kind of where I really started cluing in to the possibility – hinted at with the Ten of Swords/Air (“Rebirth”) card in the previous spread – that my Shadow is multi-layered. As in: I think my inner Queen of Swords – the dangerous and predatory part of myself that I described to Miss Sugar – is there to defend something else, something a lot more vulnerable, open, and uhh… Okay, seriously? Also probably a lot more sexual in the bottoming/receptive/Queen of Cups kind of way. Which would fall in line with a lot of other stuff that’s come up in the past four or five years, certainly.
Hm.

That being said, I’m not sure what to make of “No-Thingness” (The Heirophant) being my “receptive/yin” aspect, OR with my “understanding” card being “Fighting” (the Knight of Swords/Air). I pulled a clarification card for that one, and got Transformation (Death). Okay… Maybe that’s a link to the Rebirth card I drew for my Upper Self’s “heart position” in the Mirror reading? I’m open to suggestions about both of those, btw, so feel free to shout ’em out.

I look at Card Four – “the Meditation” – as… kind of a door? Is that even the right way to look at this? What I get from the Consciousness card is… a comfort with there being a conversation between the known and the unknown, the conscious and unconscious parts of myself. (Uh… Okay, maybe that’s a no-brainer, given the subject matter?)
So… Go through the door and you sort of get the Steps To Take all in a row. Cards five, six, and seven are insights into the body, heart, and Being, and it kind of feels like an equation?
Body-Awareness + Heath-Trust = Healing (Integration?) of Whole Being.

Look. I’m not surprised that my Advisor card is “Breakthrough”. No Kidding.
But I thought I’d do an experiment (ish? Exercise in wishful tinking / wish-craft?) and I pulled “post-breakthrough cards” for my overarching and underlying influences cards.
My overarching influence of The Burden (all of my past regrets and fears of/for the future?) becomes “Slowing Down” (the knight of earth) while my underlying “Stress” influence transforms into “Receptivity” (the very Queen of Cups that I mentioned earlier in the interpretation).


[1] Have any of you heard of the “Music Place”? The term was used by this really little girl to explain to her mom how she knew she was a girl. The thing is, I know where that place is. For all that I’m cis, and don’t have to think about it as much (or articulate it as well) as that little girl did; for all that I’ve had a hell of a time accessing it in the past 15-or-so years… I know where it is in my body. If Turangawaewae is the place where you stand tall, the Music Place is where you stand strong. It’s the part of you that knows exactly who you are.

[2] Yeah. I figure I was fine until I was seven, because Seven is my “happy age”. I know I was borked by the time I was about ten. That’s no question. But seriously. Let’s get on with this, folks! O.O[3]

[3] At which point, of course, I get this wash of “don’t say that too loudly, honey, Someone might take you seriously, and then you couldn’t control everything and things might get harder than you know you can handle.” Big surprise, but seriously. Miser, meet IMpatience. What do I do with that??

This entry was posted in All About Me, divination, Study and tagged all about me, divination, New Year New You, Pagan Blog Project, progress reports, study, tarot. Bookmark the permalink.