Instructions: “You can’t start putting all this awesome new crap into your life and body until you get rid of the old crap. Old crap here is defined as many things such as relationships that are no longer working, old crutches, clutter of the mind and of the house.” 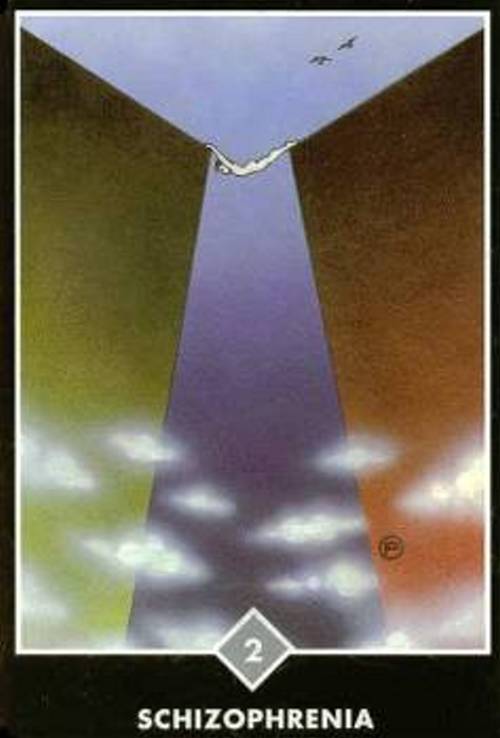 Why am I choosing the two of swords?
Well… Firstly, it was the card I drew at midnight on New Year’s, so it’s kind of sitting with me right now as a Thing To Think About, and secondly because the “two” cards are all cards of “just starting out”. The Aces in tarot are “high” – if we want to mix this with, like, poker metaphors – less like “let’s start at the very beginning” and more like the distillation of a given suits essence. Two is where the journey begins, when you’ve taken your one foot and put it in front of the other for that first completed step. So a “two” seems fitting here, as this is both “promt #1” and the second week of my current project.
Beyond both of those things though, I chose the Two of Swords because one of its messages is “Get out of your own way!”

Because, yeah, I get in my own way a LOT. I dither. I second-guess. I straight-up self-sabotage. I run through endless lists of why Trying The Thing is a bad idea that will put me in danger and not result in any pay-off. I’m looking for work right now, and a friend of mine suggested I start a Patreon (or similar) to help fund my poetry projects. The very idea terrifies me. Being vulnerable. Asking for help. O.O
So, naturally, I’m looking for part-time admin work instead.

This project isn’t about Receptivity, the way my Queen of Cups project was. But it is about connections and security just as much as it’s about pleasure, creativity, and desire. So it might be something I set up as an experiment, to see what, if anything happens. (<– This is me, telling myself there's not stakes here, no risks, so that I'll actually do it. Maybe. Maybe).

As for the questions in the writing prompt:

Where would I like to be putting my time? Modeling, writing, dancing, reading, cooking, entertaining with friends, going on dates with my wife and (fingers crossed) other cute queers.

How can I change this: Well. I can find other work, which would help with the fretting about money, and mean I could stop looking. I’ve contacted my temp agency and my modeling regulars and am sending out resumes, so there’s that. I can spend less time on social media and more time doing cheap/free things with my wife and inviting friends over for pot-lucks and cooking-dates. I can make myself go out dancing (a great thing to plan in January, I realize, but it could happen). I can watch for signs that people might be interested if I flirted with them, and then (if I like them) actually flirt with them and see if they’re responsive. Which might lead to me asking someone out on a date.
All possible. Some achievable entirely under my own power. Some is chance. But that’s why we do magic, right? To push the odds every-so-slightly more towards our own favour. So I guess I have a laundry list of what I need to do with this project.

Literal, physical cleaning of the house: At this point, I’ve mostly gotten rid of the stuff I don’t use – though there is a clothing/yarn/fabric swap coming up at the end of the month that I might be able to find a few things for. My house-cleaning is more about managing clutter and keeping on top of the vacuuming and the dishes. I’ve got a rack full of clean dishes, but another rack worth still to do. A lot of things to put back on shelves, clean laundry to put away. If my Saturday (today) tasks have included returning a library book, washing the pots & pans, and finish up the lard-rendering, then my Sunday tasks can be putting away the clean laundry and putting books back on shelves.

On a less physical level: Normally I would walk around the house burning incense, but it gives my wife a headache do… It’s been a while, but I think I can still remember how to magic-suds a place with The Elements, so I think that might be what I try.

As for emotional baggage… There is so much of it. This project, and the last one, are about letting go of that stuff. But here I am, and so much of it is the same stuff that was weighing me down six years ago. Aegirine stone is a good one for letting go of shame, for getting its hooks out of you, but I don’t have any of that, so I’ll have to make due with what I’ve got.

What I’ve been doing: Wearing my black onyx pendant and my cheroite ring in the hopes of pulling some of this nasty stuff right out of me and making room for better stuff (stuff I can call in with the labradorite and rose quartz I wear every day, with moonstone jewelry, with the malachite and bloodstone I have in my treasure box).

This entry was posted in Better Living Through Radical Magical Transformation and tagged Empress Project, New Year New You, Week 1. Bookmark the permalink.