Last Friday I got to watch the temperature plummet from a distressingly high and seasonally bizarre +12C to something closer to -19C (which kept right on falling. It’s only “warmed up” back to -19ish today). I’m just glad things dropped fast enough that the pouring rain turned to ice pellets before it hit (and therefore froze to) the ground.
Ice Moon indeed. O.O 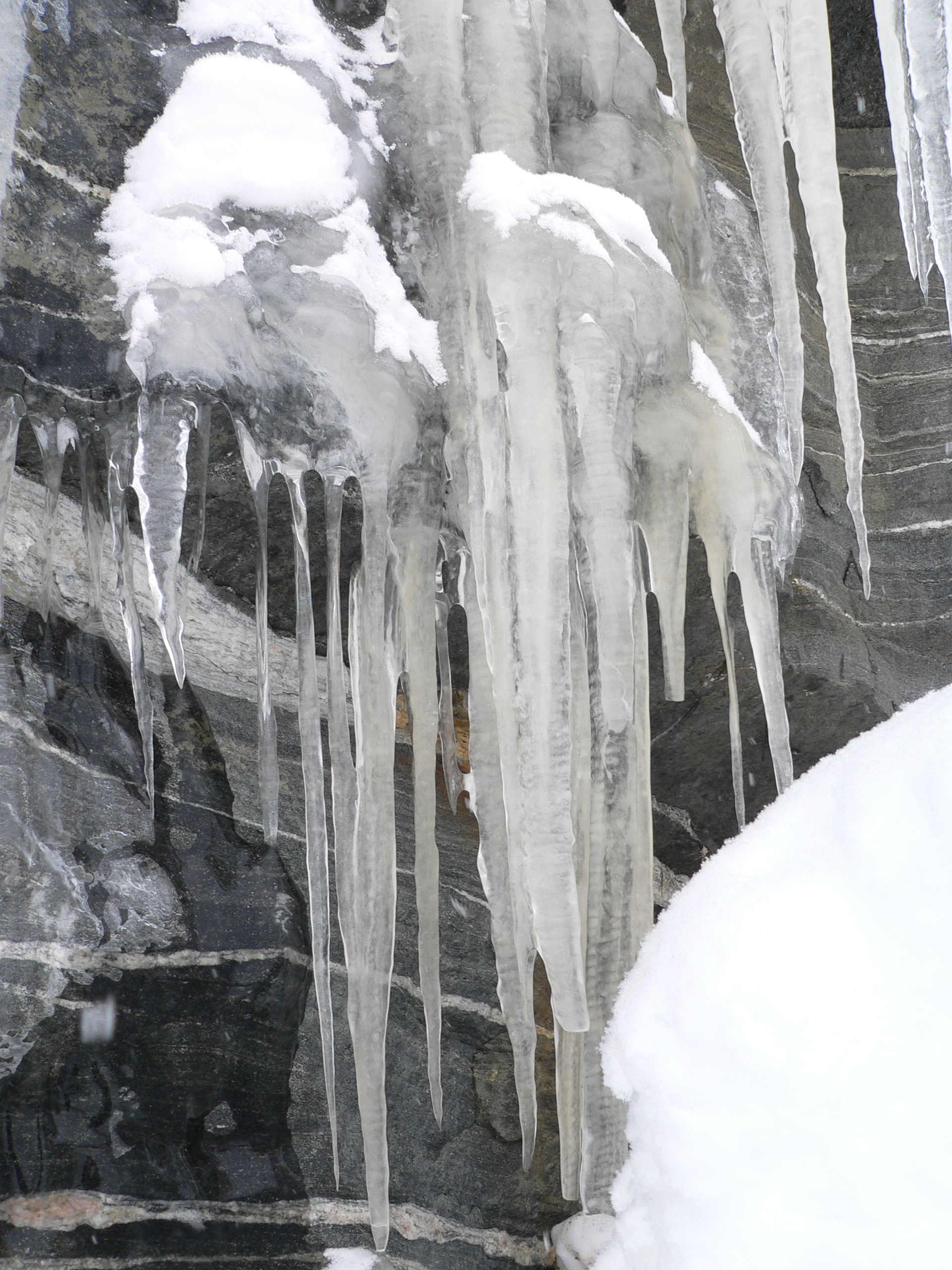 “Winter in Parry Sound B” (Photo by Jennifer Aitkens via Wikimedia Commons).
Thick, heavy layers of icicles formed on a rock cut outside Parry Sound, Ontario. Snow in the foreground.

Liz Worth reminds us that:

New moons are invitations, times to set intentions, to focus on moving forward, to take a step towards a new reality.

She says that, because this is the first New Moon of the calendar year, it’s a good time for big-picture stuff, and asks people to think about where they would like to be by the time December 2018 rolls around. Maybe it’s that Earthy Capricorn Energy, or maybe it’s the “EEEEEK it’s the middle of the month and next month’s rent is not yet in the bank!!!” scramble, but my Very Immediate Answer was “Financially Stable and also Published Multiple Times in Various Places”.
Both Liz and The Hoodwitch point out that Earthy Capricorn is an extra-excellent time for “planting seeds” and intention-setting, for focusing on, and inviting in, what you Really Really Want. A good time to do workings for stability stuff, money stuff, abundance stuff, and career stuff. But also for security stuff. Worthiness stuff.
…Basically all the STUFF that I, personally, have a heck of a time with.

A case in point:
When I pulled my Meditation Tarot Card, what I drew was the Page of Swords.
In the Next World deck, whence I drew this card, it’s called “The Home of Action” and features a young person slicing through a chain-link fence. Decisive. Sure in their rightness, even as they’re looking for something.
In the Collective Tarot, this card is the Seeker of Feathers: watchful, eyes on the sky. In the Slow Holler deck, it’s the Student of Knives, and our page is taking a good, long look in the mirror. In the Osho Zen deck, it looks like this:

Osho Zen Trot – Page of Clouds (air): “Mind”.
A portrait of a person whose distressed eyes and stress-set mouth are fixed in a mess of over-worked gears, smoke stacks jut from their head, pumping out exhaust. Their neck and shoulders are fractured 2x4s, suggesting boarded up buildings, abandoned factories and homes.

This is so very much the card of “overthinking it”, which I tend to do.
Except when it’s the home of making a damn decision.

Given my Two of Swords card, which I pulled on New Year’s, I’m inclined to read this as a little bit of both. “Don’t over think it, just make a move”.
So.
What am I doing?
I’m currently going through my backlog of poetry (like upwards of ten years of poetry) deciding what stuff I’m up for sending out and trying to get published. I have specific magazines that I’m targeting, and each of them has a theme they’re working with for the issue I’m submitting to.
There is a liiiiiittle bit of over-thinking going on? But not a lot. It’s more “Are these specific poems (a) good enough, and (b) on theme enough for them to be READY to send out”. But I seem to be avoiding most of the angsty “What if they’re (meaning “I’m”) not good enough????” stuff that I tend to hampster-wheel on, so at least there’s that.

Hoodwitch says to dream big, and carry those dreams with you as you do the work of feeding them.
Time to do some more writer magic. 🙂

Movement: Walking to modeling gigs, shoveling snow. (I finally did the back walk today, since it warmed up enough to do it). I think I need to do more (or any) lifting, since I get out of breath when doing shoveling short-burst shift-and-haul stuff in a way that I don’t when I’m doing low-impact, long-duration stuff (whether that’s carrying 20lbs of groceries home on a half-hour walk, or going dancing for a couple of hours). Not sure how much of that is holding my breath while I shovel, though. Not sure why I do that, but it’s definitely a thing that I’ve noticed.

Attention: The baby queers who take the art classes I model for. ❤

Gratitude: Getting paid. Friends who hire me. Ancestors who look out for me in really concrete ways. Encouragement. A wife who likes to hang out with me. A tiny bird who likes to hang out with me, too. Modeling work that is fulfilling and makes me happy. Friends who want to spend time with me. People who trust me with their mailing addresses. Wine and cookies and a roast with my wife. Friends from out of town who make a point of staying in touch. Sunshine sparkling on snow. Butter and cheese both being on sale. Knowing how to spin and bead and otherwise make pretty things from hella scratch. My wife’s laugh that she shares with me. ❤

Inspiration: Crows. Magic. The contents of my herbs-and-spices cupboard. The phases of the Moon.

Creation: Very little right now. I’m working on edits rather than writing new stuff this week. However I do foresee some hand-spinning (with a drop spindle) in the very near future. 😉

This entry was posted in Wheel of the Year and tagged Lunar Cycles, wheel of the year. Bookmark the permalink.