“Leaf Moon” might be a bit optimistic. It’s freezing rain right now.
Mercury is technically stationing direct today, but won’t be moving “forward” for another couple of days. Things are maybe feeling like they’re in a bit of a holding pattern ( Oh, hai, everything covered in ice, winter not getting the f out the door already…).
Jessica Lanyadoo, over at Hoodwitch is telling me to “Be patient, Scorpio. Trust that you’ll get where you need to go, and recognize that shoving won’t get you there any faster”. Which is relevant, in terms of my needing to keep myself moving but also needing to motivate myself in ways that feel like joy, like pleasure, like worthiness, rather than like punishment. (Sort of like this, but for everything).
Spring cleaning continues to happen. It feels like two steps forward, one step back, and it’s definitely a team effort over here, but things do feel a little bit airier, a little less close-in-on-us cluttered, a little more comfortable and clean, and that’s making a big difference. The rhubarb doesn’t seem too frost-struck (yet), and the Vietnamese garlic is poking green shoots out of the ground, and those, too, are both worth noting. My wife went out and turned the compost again. The earth is rich and black, and she says the worms are thick as fingers in there, which is wonderful to hear.
Life continues, even thrives, while the cold hangs on and the dust bunnies push me to my own snapping point.
If there’s a theme to the past few days, to the “open door” of this new moon in Aries, for me it’s find the wonder in all the little things that I have to do each day, that I choose to do each day.
(Yeah, I know. I’m talking big right now, and working for it, but we’ll see how things look in two weeks, a mo(o)nth, and when Harvest rolls around again…)
None the less, that’s my intention, my Capital-I Intention even, for this new moon: To find the wonder in the every-day, and also to charge/imbue the every-day with wonder, with magic, with holy intent. (This is maybe a tiny bit like Mother Noella Marcellino making cheese around and between calls to prayer… except also not really, but go with it).
My vacuum can still be a Besom when the new moon is in Aries, rather than Taurus. 😉
Cleaning the bathroom and doing the dishes can be the kind of kitchen magic I so often neglect (in favour of doing stuff on the stove), banishing the gunky vibes that can clog the airways in a house, or using them as a moment of calm or centering or focus, an in-breath that will move to the out-breath of social web-tightening, generative creativity, and joyful connection of one sort or another.
Find the wonder. Make it happen.
Which brings me to: 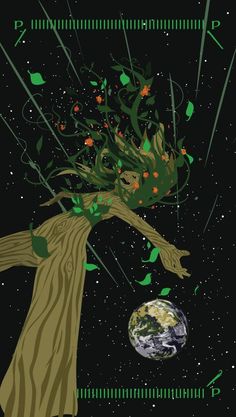 The Page of Wands from Egypt Urnash’s Tarot of the Silicon Dawn.
In this deck, “wands” in the suit of Earth, while “pentacles” is the suit of Fire.

In the Silicon Dawn deck, “wands” in the suit of Earth, while “pentacles” is the suit of Fire. Typically, it’s the other way around, which makes it a little confusing to read with, and… tbh, straight-up annoying to work with as a translator deck when I’m looking for alternate perspectives on a given reading (like the way various sixes of cups put the emphasis on such different aspects of the card). However, I still quite like the deck’s cartoonish, futuristic art work, pop-culture references, and overt sexuality, so here we are. I tend to try to find points where wands and pentacles overlap or dovetail when I’m reading with it, but put the emphasis on earth-interpretation, rather than fire-interpretation, when a wand card from this deck shows up.
Onwards!
This card, the Page of Wands Earth, is very much a “make something” kind of card. A “go exploring” / “grow and expand” card (two places where it can intersect with the playfulness of the traditionally fire-coded page of wands). It’s a “trust your process” and “trust your body” card. Which means it’s very, very relevant to all the stuff I’m trying to do, trying to remember/re-member in my day-to-day actions, trying to bring back and increase in my life.
Good job, tarot deck! Definitely noted!

Movement: The last week and a bit has involved a lot of not very dynamic sitting down. At a desk, while answering phones. My daily commute-walks were only about 15 minutes each way, which isn’t a lot when I’m used to 45-minute walks to and from modeling gigs (which, often as not, are roughly equivalent to 3-hour yoga classes, as far as physical activity goes). That said, the fire alarm went off on Friday, just before my temp job wrapped up for the week, and (after the all-clear) I walked up five flights of stairs and… was a little out of breath, and could tell my thigh muscles had been working. But that was it. I wasn’t gasping. I didn’t feel like my knees were going to give out. I didn’t feel like I was going to keel over. I felt pretty good. Which I was seriously not expecting, since I get winded walking on flat-but-icy sidewalks or taking a single flight of stairs. I think it’s because I have a bad habit of holding my breath. I have to remember that breathing deeply and steadily means that I can do more because I’m not stressing my heart and lungs. Relevant to know! Beyond that… I’ve been doing squats and side-lunges, using my upstairs banister as a support because I tend to stop myself from going as deep as I might be able to when I’m afraid I might pull something or hurt something. (Ha… There’s a metaphor in there somewhere). I also went dancing last weekend, which was lovely. Looking forward to doing more Get Bendy stretches in the morning and to this week’s modeling jobs, which should help me feel a little more limber.

Attention: Have to admit, I’ve been paying a lot of attention to the weather. This Unseasonable Storm we’re having, while it isn’t hitting us too hard (er, yet…) is probably going to be here for a little while. Like, for the better part of a week, even though the temperature should start rising in the next day or two. Beyond that I’m paying attention – or at least resolving to pay more attention – to finding the sacred in the every-day, and finding ways to make magical the step-by-step of putting one word in front of another, putting one foot in front of the other, and generally moving forwards in all areas of my life (see Inspiration for more on that subject).

Gratitude: Thankful for new poetry coming in at the library (need to pick that up tomorrow). For playful, giggly shenanigans with my wife. For friends who want to talk tarot or wine tasting or areal hooping at the drop of a hat. For little birds who trust me. For sewing skills and cooking skills. For a plentiful larder, pantry, and freezer. For central heating. For the clean bathroom. For muffins. For a wife who makes me coffee and breakfast and gives me a clean kitchen to work in. For seeing someone light up when I tell her that I can see her queerness. For steady feet in high winds and on icy roads. For new sheets fresh on the bed.

arrived in the mail earlier this week, and it’s hitting so many relevant notes for me about body-consecration, glamoury, sex as holiness, trash magic, and self-sufficiency. I mean, maybe that’s not surprising, given that it was written by a bunch of witchy femme queers (mostly women, some non-binary). But it’s lifting me up and getting me kind of weepy at the same time. (I talk a little more about that here). It’s giving me directions to go in. Landmarks to get myself re-oriented, so I can re-find that path I was already on. It’s a huge big deal.

Creation: Not the fuck much. I wrote one (1) poem this past week. I mean, it’s a decent poem. Need’s some polishing, but the bones are there and it’s a place to start. But I’m taking myself on a writing date in the next 48 hours because I need to put some words on the page. Probably do so when I go and pick up my library books.