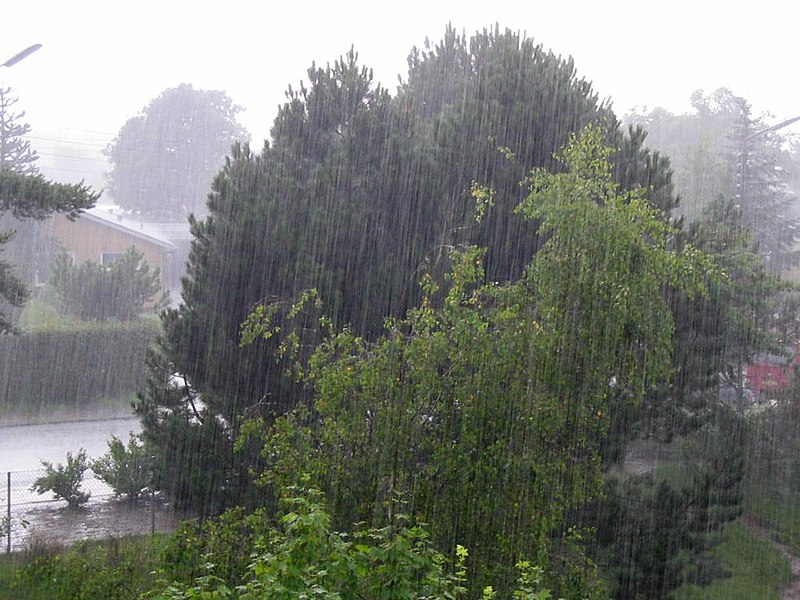 Photo by Tomasz Sienicki
Via Wiki Media Commons
Heavy rainfall on a suburban street. There are mixed coniferous and deciduous trees in the foreground.

The rains came back! 😀
The temperatures haven’t been quite as astonishingly high and we’ve been getting a little (and sometimes a LOT) of rain most nights, and some days, for the past week.
I hope this continues.
August (coming fast) has historically been thunderstorm season in these parts, and we sure do need them right now.
It’s kind of amazing to watch the second crop of radishes germinate, and the dandelions starting to put out new leaves.
I reseeded my greens bed with rainbow chard, collards, and Tuscan kale, in the hopes of filling in a few empty patches with greens I can throw in my freezer.
The chard that’s been struggling for the past month seems to be doing a little better in the cooler temperatures and regular rains. (I water the garden every day, but ten minutes with a hose is NOTHING like four hours of the entire sky dumping water on you). The soil in my raised beds is still pretty dry below the surface. One of my goals, this autumn, is – after the frost kills everything off, but before the ground is frozen – is to dig a lot of organic matter (like dried up veggie stalks and straw, but also manure compost if I’m able to find some) but, ideally also a lot of absorbent cotton rags (like threadbare old tank tops, for example) way down deep to help retain water in what is still some pretty depleted soil.
I mean… good luck with that, person with back problems who can’t deal with squatting for more than two minutes at a time, but that’s the goal.
In the mean time, I’ve been harvesting mostly-wild leafy greens – purslane, sow thistle, lamb’s quarters, and wild grape mostly – from the back yard and the surrounding neighbourhood and turning them into “wild sour kraut”, which I put on sandwiches and mix into soups.

Today I pulled up a bunch of icicle radish (some with nice root, but mostly just for the greens) plus some sow thistle, and I’ll be adding that to my current veggie ferment, which is mostly wild grape leaves (currently the biggest leaves available,which is why). It’ll be a nice, crunchy one, but also a bit more tannic than usual.
I’ve been (buying and) freezing zucchini for a month or so, too, which is nice.
I have to tell you. I know Michael Pollan has some Problems[1], but every time I read one of his books, it does make me think about what kind of food I’m growing (or not), cooking, and eating, and that what I want to be dishing up – stews, pot roasts, and braises heavily studded with winter squash, mushroom, sturdy cooking greens, and garden herbs; pasta dishes bright with chard, young (not nearly so bitter) wild greens, yellow summer squash, cherry tomatoes, and crow garlic; strata baked from sourdough bread, heavily drained labneh (yoghurt cheese), sliced apples or pears, and eggs from ethically-cared-for hens (I wish) – isn’t quite where I’m at yet, even if I’m close.
Basically, I think I need to double the amount of veggies I cook in a given dish, or else cook more than one dish worth of veggies – doing a tomato-cucumber salad to go with the pasta or the pilaf, or steaming some broccoli or winter squash to go with the carrots, potatoes, and cabbage that were cooked in the same pot as the pork and barley.
I admit that the thought of buying substantially more veggies – even frozen ones, which are generally less expensive than fresh – is daunting. But I think it will be better for us, over all, if I can make it happen.

I’ve spent most of last week modeling for a five-day oil painting course. It was really nice, and was enough hours that I was able to top up the rent for August, but I’m very glad to be getting my “weekend” now that it’s Monday.
Plans for today include writing this blog post, steaming some zucchini, finally making some candle offerings to my gods and ancestors (those candles are now lit, and I’m quite happy about it), getting a few more greens into the fermentation crock to pickle, and finishing reading that latest food theory book.
It’s going to be an easy day. I hope.

I’ve been thinking about ancestors lately.
In part because I’ve been watching half a dozen or so people trying to paint pictures of me, and I see the parts of my face -reflected in their paintings – that come from my various parents, grandparents, and generations further back.In part because I’ve been reading In Defense of Food and the part of what that books says is that “food” is something your more distant ancestors would recognize as such[3].
Cooking with barley rather than rice (not exclusively, granted). Trying to grow my own “kale yard” (which was what the Scotish folks allegedly called the household veggie garden, ’round about the 1600s when we were eating a LOT of wild foods as well) and forage a lot of urban greens[4], is stuff that my ancestors have done. Up until pretty recently (my mom grew up dairy farming; my dad, while he grew up wealthy, also grew up rural and did a lot of fishing for meals). I’m a much worse angler than I thought I’d be (based entirely on childhood fishing trips), but I’m theoretically getting better at gardening and foraging and fermenting, and I’ve been making really good jam and relish for years. And all of this stuff is Family Stuff. My grandparents (my mom’s parents) saw a former garden of mine – something like 13-14 years ago, in a much different part of town – and they were so happy to see me growing food of my own. I’m proud of it, when I’m able to manage to do it, and part of why is because it’s something I learned from them to value and also do.

Tarot of the Silicon Dawn
(Egypt Urnash)
Left = Three of Water (A trio of intergalactic snake people, entwined and having a jolly good time together).
Right = Eight of Fire (A fire-haired video game character pitching a flaming pentacle at the viewer while gaining extra hit points).

I drew two cards for my Tarot Card Meditation. The first by just flipping over the shuffled deck and seeing what was on the bottom, and the second by cutting the (now upside down) deck at random and seeing what it “opened” to.
Who I need to be? The Three of Water
Abundance. Pleasure. Love overflowing. (Egypt Urnash).
Discover pockets of joy and comradery. Reconnect with your happiest safe haven. Find peace amid chaos. (Cristy C. Road).
How I need to be the three of water? The Eight of Fire
Courage. Boldness. You’ve got the power-up and some extra lives to experiment with. (Egypt Urnash).
Ignite your passion as you heal with laughter, yelling, song, and dance. (Cristy C. Road).
Who I need to be is an active participant in my web of relationships.
How I need to be that, or maybe what I need to do (action-wise) in order to be that, is creatively engaged and (surprise, surprise) willing to take some risks.

Discover pockets of joy and connection. Heal with laughter and song and dance. I kind of feel like this – appropriately, perhaps – relates to the card I drew at the New Moon, which suggested that I needed to get the heck out of my funk, reconnect with my sweetheart(s), and re-engage with joy, instead of staying camped out on the Planes of Desolation and Preemptive Disappointment.
This is like that. Creative engagement and some emotional (uh… I assume?) risks are both necessary for connection with other people, especially if you’re me.

Movement: You wouldn’t think sitting still for six hours a day, all week, would be such a strain on your neck and shoulders, but there it is. However! The studio was a ~45 minute walk from the house, so I got in a good hour-and-a-half walk every day, which is nice. Totally skipped going dancing on Saturday, though, due to the 7am alarm clock I’ve been dealing with all week.

Gratitude: Grateful for rain. For enough modeling hours to cover the rent. For knowing how to find & harvest leafy greens and fruit (chokecherries, early apples) somewhere other than a grocery store. For libraries. For coming home to clean dishes last night. For a wife who misses me and makes me smile. ❤

Inspiration: Watching people learning to mix bright colours into skin tones and figuring out how to make a 2D picture look like a 3D form using lighter and darker shades. That’s pretty cool, and I kind of want to try painting a picture of an egg now. >.>

Creation: Remarkably little. I’ve made some progress on my knitted cotton tank top, and have written a few thousand words in my Spite Novel, but that’s about it.


[1] Specifically, he’s a fairly wealthy man, born in the mid-1950s, who lives in an area where you can grow/buy fresh local veggies 100% of the year, and he’s writing for people who are in more or less the same demographic (not actually bad, in and of itself), even if they aren’t in the same part of the world. He has some spots where his understanding of the culture he’s writing in and for gets a little willfully spotty, particularly around the idea of who is most likely to be taking on the extra 2+ hours per day of meal prep that his particular dietary/ethical suggestions require, and what gender they will most likely be. Just because Michael – as a freelance writing who often works from home – does most of the cooking at his place, and has a job that allows him to do so by interspersing those two hours in and around the rest of what he’s doing on a given day… doesn’t mean that’s how it goes in most households in the demographic he’s writing for, let alone, say, Millennials and Gen-Xers, in their 30s and 40s, who are more likely to be “spending less than 10% of their income on food” because they are spending 40%-50% of it on housing[2], and still have to come up with a way to pay for those pesky utilities (y’know, like heat) and crushing student loans while working unstable gig-economy and low-waged service-industry jobs.
His writing doesn’t exist in a vacuum, and sometimes he writes as though it does.

[3] Which is not stopping me from buying freezer pizza, ice cream, chocolate bars, frozen berry punch from concentrate, or tinned mushroom soup, I’ll have you know.

[4] Which tend to be invasive plants brought by my colonizing ancestors, see in particular: rampion and garlic mustard, but also plantain, purslane, dandelions, crow garlic, and lambs quarters.