The Full Moon was technically yesterday. The sun is low, low in the sky by 4pm, and Winter has definitely arrived.
In the past two weeks, we’ve gone from “a dusting of snow” and temperatures where it didn’t matter (much) that my big, leather coat is still missing a button and needs its button holes tightened to full-on WINTER with a foot of snow already on the ground, bitter winds, and -16C (before wind chill) temperatures. It’s both Very Unpleasant (because everything takes longer to get to – a 45-minute walk is now an hour, for example, because the snow clings to my boots, and is slippery, and both of those things slow me down) and kind of a weird relief, because this the kind of fast drop into winter that I remember from around when I was ten (but not when I was 17 – when it would get quite cold, but there wouldn’t be much snow…) We’ll see what Climate Chaos has in store in terms of zig-zagging temperatures, though, as this week continues on.
I admit that the weather has me thinking ahead to Midwinter, sending a Solstice Letter off to this project and planning out what I want to do as the Season of the Witch (two weeks left!) turns over into the Season of the Hag just as Long Nights Moon in born.
One of the things I’m thinking of is ritual. As in something a little more involved than the (approximately) weekly ritual of lighting candles and saying Hello to my gods and ancestors on (usually) Friday nights, or the quick greetings I send, like text messages to the great beyond, when I pass the ancestor photos on the stairs, see the moon come up, feel the sun on my face, take out the compost, brush past a hawthorn/rowan/sumac/cherry tree, or cross the street.
I’m thinking of something that maybe feels a little bit more like church, if I can put it that way.

See, I did something this year that I haven’t done in a long time.
Technically, the specific thing was something I haven’t done before, ever. But, more broadly, it’s something I haven’t done in a long time. Like I said, my usual offerings are done… pretty lackadaisically. I light up my altar candles, pour some boiled water into a cup, say Hi to everybody, and then go and do my own thing while the offering candles burn down. Beyond that, “ritual” tends to be more like “ceremony” and tends to be very me-focused. All those magically-infused baths and tarot meditations.
There isn’t anything wrong with this, BUT it’s been a long time since I did something that felt more like “church” and less like “therapy” in a ritual context. It’s been a long time since I did something group-based, too.
I recently spent nine days – okay, eight days, ‘cause I was late starting (typical…) – taking part in an Ancestor ritual that’s open to pretty-much anyone who wants to participate. It’s an Ancestor Elevation ritual to give comfort and honour to the trans folks who’ve died this past year, and in years gone by. It’s done in relation to TDoR.

I have to tell you. I initially felt a little bit weird doing it. Like I was imposing or something. If the website hadn’t literally said “you don’t have to be trans to take part in this” I probably wouldn’t have done it. But I’m glad I had the opportunity, and I’m glad I took it. (And I’m also glad that I finished it).

This next bit IS going to be very me-focused.

I appreciate the container that the specifics of the ritual provided. That there were elements that were important/necessary to include (and that, by having everyone include them, builds a certain amount of cohesion across rituals that are being done privately or in small, unconnected groups). But I also appreciated the amount of freedom available within that container. It meant that I didn’t have to be sitting there with my computer on, reading Prayer 7 of 22 off the screen, but could make it my own.

Mostly what I did was choose a piece from the book I was adding to the altar that particular night, read it to anyone who happened to be listening, add it to the altar, and then do some singing. No lyrics. Just energy offered through sound. Music’s good for offerings. It can be soothing and uplifting by turns, if that’s where you want it to go.
I hope it helped.

Some nights, I did the ritual with my wife, but mostly it was just me. I’ll be putting it in my (newly arrived) date book, so that I can do it again next year. It feels good to do something to mark the occasion that is meant to help the people who were killed or died by suicide[1].

And so here we are.
And now I’m thinking about ritual as a thing that is a container. I’m thinking about it as a way to direct my actions outside of my own (sliiiiiiiiiiiightly neglected) self-improvement projects. I’m thinking “What kind of ancestor do I want to be?[2]”… And I’m thinking about what I want to do with the impending darkest time of the year.
I’m thinking about doing actions on a theme – dark, cold, shadows – Could I follow the Fool’s Journey down into the dark, where the Sun shows up on December 20th, Judgement on the Solstice, and The World the night of my big celebration? How can I relate The Fool, the Magician, the High Priestess, the Empress AND the Emperor, the Heirophant, and The Lovers to questions around what is Darkness, when do I need it (contemplation, drawing inward, root time, introvert-time, self-care[3]) and when do I need to bring in the light (hope, offering support, SADD stuff, both seeking and offering guidance)?
Just as a for-instance.

For now, I’m still chewing on it. It might end up being a card-a-day draw, and trying to see how the card relates to a theme I want to explore that week. It might end up being something super-basic like dropping off socks and soap to a couple of drop-ins around the neighbourhood and inviting people in for comfort food once a week.
We’ll see where it takes me. 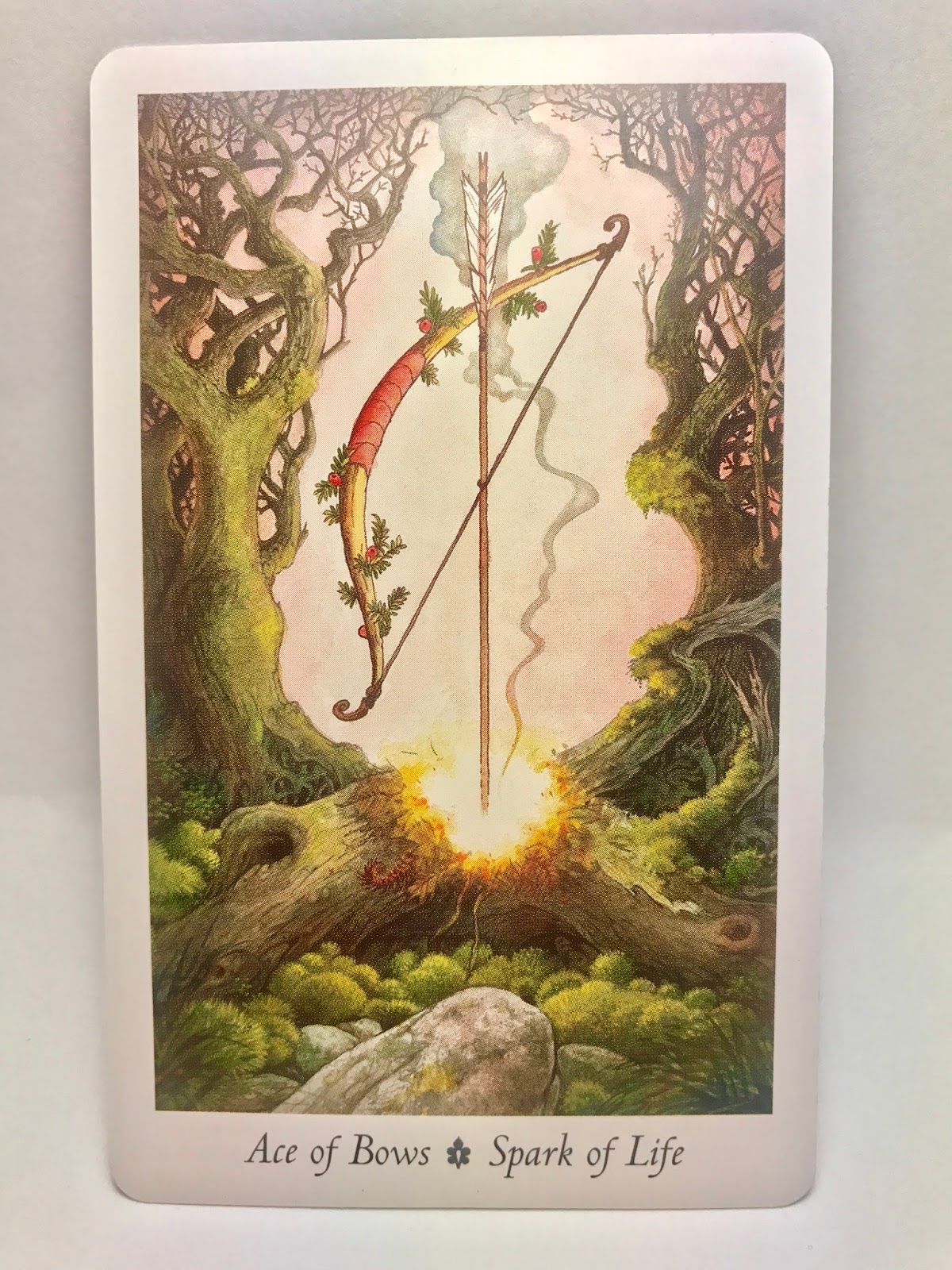 Ace of Bows – “The Spark of Life” – Wildwood Tarot – A bow and arrow hover in a clearing, the friction of the arrow against the bow-string sparking a new flame in the side of a fallen log.

So. My tarot card meditation for today is the Ace of Bows. The roots of fire. Which is hilarious given that it’s such a Midsummer card, but here we are.
This is a card about creative projects and fresh starts, sure. But it’s also a card about directing your energy, about seeing things through, about “Give’r!”. It’s a card that says “JFC, Meliad. Write something for your novel. November’s almost over.”
However – appropriately to both the multi-day ritual I just finished and the impending darkest dark of the year – the Ace of Bows is also the candle in the dark. It has resonances with The Star, in the sense that it pertains to finding your own true north. What are the principals that guide you through the dark of uncertainty?
What kind of ancestor do you want to be?
Choose your actions, and make your creations, accordingly.

Movement: Only the usual walking and modeling work. I’ve been doing transcription for the past few weeks, so I’m actually moving less than is necessarily good for me. I need to remember to walk up and down my own stairs and do ten yoga poses in a row on those (many, many) days when it’s cold and awful and I don’t want to leave the house if I can avoid it.

Attention: I’m paying attention to the weather report. To the state of the sidewalks. Calculating how long it will take me to get from point A to point B. Watching my bank account and wondering how long the money from my transcription job will last. Watching the little white cat with the black tail who comes to our compost heap hunting for rats[4], and hoping she sticks around.

Gratitude: Grateful for snuggly, cozy nights with my wife. For video-based date-nights with my girlfriend. For transcription work that pays well (uh… or that will, once the cheque shows up…) and extra modeling work coming in at the last minute. Grateful that my wife and my girlfriend really like each other and want to hang out more (YAY COMPERSION!) Grateful for the neighbourhood rat catcher hanging out in our yard. Grateful for a quiet afternoon and discount hair dye, because my hair is now maroon once more, and I’m very happy about this situation. Grateful for free clothes from friends AND for places – like the GG Lit Awards (I am not a winner, just an audience-member) – to wear them. Grateful for friends who will listen to me cry. Grateful, too, for friends who feel safe and comfortable crying on my shoulder.

and Rebecca Roanhorse’s Trail of Lightning

. Also drawing inspiration from – believe it or not – the snowy weather. The wind carves the snow ‘til it looks like the bottom of a sea bed (which is what we, in my neck of the woods, are living on, as it happens).

Creation: Not a whole heck of a lot. Lots of cooking, sure. I came up with a potentially delicious mulled-wine recipe that relies on juniper and anise hyssop (i.e.: stuff that actually grows here) for flavouring, and I’m looking forward to testing it out. Ripping out a knitting project and starting it over completely? Sure. But these days I’m barely even doing any mending, let alone creating new garments from scratch. That said, I did get some good news on the publication front a few weeks ago (more on that when the anthology comes out), which is really nice and kind of a shot in the arm.


[1] Which doesn’t mean this lets anybody off the hook on the front of doing actual stuff to help out, and look out for, the people who are still alive. Check in with your friends. Bring people groceries or let them use your laundry machine. If you can, give somebody a steady job. Throw money at people’s crowd-funding campaigns and Patreon accounts, and otherwise buy their work.

[3] Which… I think it’s interesting that I associate The Dark with time to recharge (maybe not shocking, sleep being what it is) and time to spend on my own, just breathing, just having a bit of calm (maybe I associate light with being over-stimulated?) A thing to think about.

This entry was posted in Ancestors, ritual, Wheel of the Year and tagged ancestors, cosmology and axiology, living religion, Lunar Cycles, ritual, wheel of the year. Bookmark the permalink.