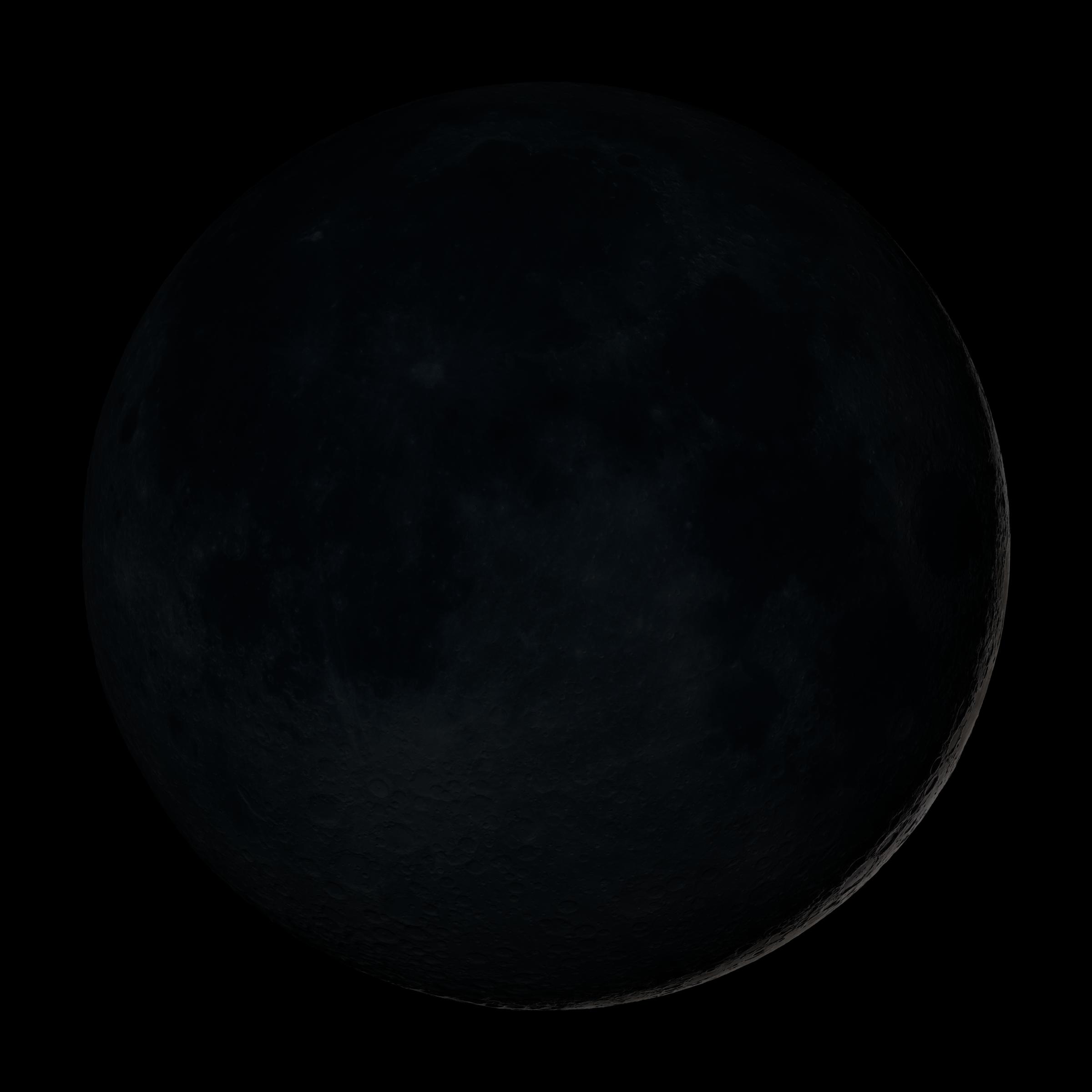 New Moon – Image Via Wikipedia – A thin, thin sliver of silver along the edge of the dark face of the moon.

I made candles today, and lit the altars. There a glass of sortilege up there as an offering, since the Season of the Hag kicks off, well, technically yesterday since this post is going up a day late (the “winter” wreath is on my door at last, though I haven’t hung up the holly garlands yet), and I’m hoping that winter will be kind. In-so-far as that’s an option, anyway.
My wife and I are having a quiet evening in, eating pizza (or will be, when it gets here), and avoiding the cold weather. I made bread today, and Persephone Shortbread (see below), and started planning my grocery list for the big Midwinter Stocking Up that I’ll be doing some time in the next ten days. I figure: if I’m getting six litres of sweet cider, plus a bunch of other beverages, for the annual Solstice Party? I might as well get 20+kg of flour and 10lbs of beets and similar, since I’m paying for delivery (or borrowing a car) anyway. The year is definitely winding down. I have friends blogging about the goals they met (or didn’t) this past year, and other friends doing tarot readings for what to potentially expect in the next turn around the sun.

Wildwood Tarot – “Home” – Ten of Stones – A traditional round house, this one with a mature tree growing up through its center, viewed through a stone arch.

Tarot Card Meditation:
This card isn’t a random draw.
Not this time.
I was shuffling my Wildwood deck and this card kept drawing my eye, so I went with it.
It’s a card about taking part in traditions.
It’s a card about long-term plans.
It’s a card about sharing what you have.
It feels very appropriate to draw this card right now, and to try to live by it’s invitation to claim your personal power, to build (up) your community, to create and maintain the traditions that matter to you, to nurture your roots (it is Root Time right now, after all), to be generous with your resources (time, energy, attention… “resources” doesn’t just mean “money”), to make things that last.

Movement: Not enough dancing! I would like more! Lots of lifting a full pressure canner up and down though, so there’s that.

Attention: The state of the sidewalks (the ice is starting to turn up… yeeg). The temperature, which swings between -3 and -19. The wildlife in the back yard (watching for the little white cat who comes to hunt rats out back, for the most part, but the winterized squirrels are utterly adorable).

Gratitude: Grateful for the opportunity to borrow the pressure canner from the OTL. For a couple of quiet days to put some food up for myself and others. For a wife who snuggles me when I have bad dreams. For an internet connection (it’s back!) that lets me talk to my girlfriend (and for said girlfriend). For new (to me) clothes that fit and let me feel swanky. For the transcription pay-cheque that finally came through (!!!) and the knowledge that January’s rent is covered for sure.

Inspiration: Trying to draw inspiration from the season, from the cold and the dark and the deep shadows. And also from the major arcana, because using that system for different projects and thought experiments is a way to get to know the cards a little better and a little differently, which I like.

Creation: I find myself singing more, these days. Maybe it’s the solstice music I’ve been playing, but it’s nice to be singing again. Not exactly “creation”, but something artistic and good for me, none the less. I’ve also written a couple of thousand more words on That Novel, so that’s a little bit of progress on that front.

This entry was posted in paganism, Wheel of the Year and tagged cosmology and axiology, living religion, Lunar Cycles, paganism, seasonal, wheel of the year. Bookmark the permalink.