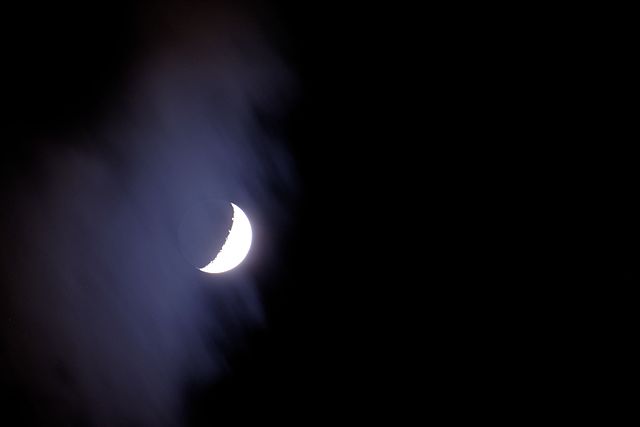 “Crescent Moon with passing Cloud” – Daniel Ramirez – Via Wiki Free Images – A waxing crescent moon, almost to half-full, on a dark night, as seen through a veil of cloud.

Today I’m shoveling yesterday’s fall of snow, and running some errands. Getting groceries and printing off the four-fold solstice cards that I designed (“designed”) myself. There’s a picture of a winter sunrise over Lake Superior – another wiki free images picture – to go on the front and, inside, it says “So much light // begins in the dark” (which is a Cat Valente quotation from one of the Fairyland books, if you’re wondering).
It’s overcast and grey today. The sun sets in… a little over five hours? Not a lot of time to get things done.

Dark is pretty literal this time of year. It comes in fast, means I need to get any outdoor chores (not a lot, given that I live in an urban area – just shoveling snow, handling compost, making offerings (in-so-far as that is any kind of a chore, but you get the idea), running errands on foot when I want to make sure me and my black coat are visible when crossing the streets[1]. It makes it hard(er) to get up in the mornings and hard(er) to stay up in the evenings, when I find myself ready to crawl into bed by 6pm.
Dark is also the SADD stuff that effects so many of us (self included) over winter. It’s the heavy sadness and powerlessness and hurt that comes when everything around us is screaming about faaaaaaaaaaaaaaaamily and we have weird relationships with our families-of-origin or the religions we grew up with (so many pagan folks grew up in families that are culturally, if not actively, Christian, and that can make things weird this time of year). Feeling erased. Being the odd-one-out the family and having to hide our difference in order to have anything close to a welcome. It’s the way old trauma can flare up when giving and receiving are taking up a lot of space in the cultural discourse.

This second week of December, my focus is “Dark”. Checking in with friends to ask how their hearts are doing. Bringing little multi-packs of nail polish to the Cornerstone residence in my neighbourhood. On a slightly more macro level, I’ve also become a monthly donor to Trans Lifeline (an explicitly t4t peer-staffed crisis line) and have sent an annual donation to my local trans org, THIO, that does youth mentorship and other community outreach as well as helping trans folks navigate the local health-care system.

The Chariot
The Chariot is a card of “get up and go”, about drive and focus and, tbh, about a lot of what Ms Sugar talks about on the subject of austerity being glamourous. It can, I think, touch on our potential to be pushy and demanding, espousing a sort of “my way or the highway” attitude. But I love some of the depictions of The Chariot as Awareness and as a grown-up femme, running her life (to paraphrase, or possibly directly-quote, Leah Lakshmi Piepzna-Samarasinha).
This is, at its core, another card that asks if you are living/acting according to your values. How does your actual life (and the parts of it you actually control very directly) stack up against what you imagine your “ideal day” would look like? If your ideals say one thing – whether that one thing is “Everybody should be food-secure and have easy access to clean water” or “I am a writer, dammit” or “Emotional labour is actual labour and should be valued as such” – are your actions supporting your ideals?
What can I do, today, to support my ideals with action?”
For me, that means asking people if they have the brain-space to listen to me vent, rather than just launching into it without checking first. It means making time (ha… I need to actually do that though, ’cause I haven’t been lately) to write poetry and prose, most likely by unplugging the internet for a few hours at a time. It means checking in with people about whether or not they need groceries right now, or paypaling $10 to someone when they tweet about needing some bridge-funding to cover food.

Strength
Yes, I know that this sometimes switches places Justice, but most of the decks I work with (I think the Wildwood is the exception) feature Strength as the 8 of the Major Arcana. (It’s my birth card). I think my favourite iteration of this is the one from the Osho Zen deck, where Strength is labeled “Courage” and is depicted as a flour growing through concrete.
I think this image speaks really eloquently to the vulnerability inherent in blooming, in opening up to grow, to take in water, to take in light. Considering this card at this time is a lovely reminder that we are in seed space right now, waiting out the cold, buried in the dark of the frozen ground. Strength is a card that carries “a reminder not to despair or give up“. It asks us to be a “rock” for others, to treat people kindly and with patience, to breathe through our frustrations. To practice compassion (with other people, sure, but also with ourselves).
Where do I need to be patient? What do my frustrations have to tell me about the situations I’m in? Who in my human and non-human communities need my support right now? What can I realistically and sustainably offer them?
Right this minute, that means checking in with friends-and-family who are having a hard time emotionally due to work stress and family stress. It means Strongly Suggesting that my partners take some time to soak in epsom salt baths to help with body pain, or to make time for some quiet grounding exercises to help a little bit with stuff like compassion fatigue.

The Hermit
What I said about “seed space”, above, holds true here. This is a time of awareness, but not necessarily a time of action. (Although I am making a point of taking action on a bunch of small fronts specifically at this time, so… make your own decisions there).
Which… I know I’m focusing these themes on “alleviating stuff that sucks”, so I’m treating “dark” in its most negative sense. But I want to point out that Dark is also rest. That it’s a time/place for contemplation, that it’s a breathing space, a chance to escape sensory overload, to put your roots into the ground and let your shoulders drop a little. The dark can be a gentle, enfolding space of safety and recovery, too. And that’s relevant to this card, which is so much a card of “alone is not the same as lonely”.
Where am I feeling overloaded? What can I do for Self Care? How much of that means “Body Pleasure” and how much of that means “Doing The Thing That Is Good For Me Even Though I Don’t Wanna”? How can I use this time of turning inward to lift my own sadness and despondency rather than sink more deeply into it?
For me, this means, yes, making time to read and write poetry, and also taking time to sing and dance and move my body.

The Wheel of Fortune
This is a card about changes, about turning points and tipping points. Of big changes coming just around the corner. But it’s also a card about cycles and patterns. To speak of it at this time of year, I can help but treat it with an eye to the Year Wheel and, tbh, the recent new moon. Cycles that are waxing, cycles that are waning. Cycles that are getting ready to start another round. If The Hermit is a card about taking time to turn inward, The Wheel is a card about connections, about hooking-things-up, about webs, and about patterns.
What patterns are you ready to put to rest (recognizing that this may take another cycle or two before you really get good at heading them off at the pass)? What habits do you want to build into your day-to-day? On the micro level? On the macro level? What metaphorical bulbs and seeds and roots are sleeping now, but waiting to germinate as the next year-long cycle starts building up speed?
As-you-know-bob, I find I stand a better chance at breaking old patterns if I give myself a new set of patterns to establish. So, when it comes to seeds that are planted but maybe not yet germinated, what have I got?
On the personal/micro level? All that stuff I mentioned under the heading of The Hermit, actually. Moving my body more. Making (and keeping) time to write (to create more of) my poetry. Singing more often and allowing that singing to be personal-level energy work as well. Moving my body more through dancing, kundalini yoga[2].
On a more macro level, I want to for a habit of checking in with not just human friends-and-family, but with the specific plot of land I live on. Asking Mattaer and Misha, in particular, how they’re doing and what they need to feel better at any given time. To take my responsibilities to this bit of ground a step past “water the plants” and “compost your hair and fingernail clippings” and “top up your raised beds every spring” and “scatter the seeds of fruit-bearing trees far and wide” and into something that goes a littler further, though I don’t know what that would look like, having not got there yet. It might involve the River Keepers. It might involve something else.


[1] I’m about 2/3 done the “safety scarf” that I’m knitting in day-glow hot pink with glow-in-the-dark beads looped into it which, once it’s finished, should help me be a little more visible. I don’t love that I can’t trust drivers to pay enough attention at cross-walks to not try to make a right-hand turn right over top of me, but I also don’t want to die, so: Safety Scarf it is.

[2] Which I need to be careful about because some of those actions mess with my lower back. Some of them don’t, though, and do help keep my feet from freezing. So that’s relevant to my Winter body, in particular.