Winter Exercise in Light and Shadow – Via Wiki Free Images – A frost-covered shrub casts a shadow over the snow.

New Moon was yesterday – and a Solar Eclipse with it, although it happened a solid four hours after sunset in my part of the world. New Moon. And a solar eclipse, which Lisa Stardust (over at The Hoodwitch) says is rather like a new moon, energy-wise, with regards to new beginnings and new life-chapters kicking off.

I finally – ha, I usually do this as soon as it arrives in the mail – looked up my 2019 year-at-a-glance horoscope in my date book. It literally starts out with the following:


In the beginning of 2019, you may be feeling anxious and riled up.

Ha. No kidding. I’m due to get on a plan in 25 days (yes, I’m counting days) to go visit my girlfriend, and my anxiety-brain is chittering away in the background about how “I’ve done something bad” (I haven’t) and “Someone is going to be mad at me” (highly unlikely).
Look, I’m just going to say a thing: My anxiety isn’t bad. I don’t have panic attacks – or whatever high-anxiety freak-out thing I have that I’m currently labeling as “panic attacks” – very often, and I can manage this stuff with breathing patterns and other non-meds-based ways of calming myself the heck down when I do start getting wound up.
But there’s a pretty constant attention-dribble, if I can call it that, that goes to keeping track of why my brain is telling my adrenal glands, and what-not, so that I can catch that stuff when it’s still in the “low-volume high-pitch note played on a violin” level of anxious background noise, before I’m irritably snapping at my wife, seething under my skin, or jumping at every unexpected noise. But it still gets ahead of me sometimes and I feel my chest getting tight and all the rest of it.
And, since it all seems to be stepping up a little right now, I’m noticing it. It’s tiring. It’s not the end of the world, but it’s tiring.

Anyway. So, yes, Rhea Wolf, I’m definitely starting 2019 feeling anxious and a bit riled up.
That said, I’m hoping she’s not wrong about the hypothetical influx of (Jupiter-related) greater security that’s coming my way. I admit, I’ve started listening to Gabby Dunn’s podcast with that in mind.
I’m still doing glamour work, still doing Miss Sugar’s NYNY cycle (even if we’re into the second year of this particular project). Keeping my fingers crossed for more transcription to follow the work I’m doing right now. A little bit of on-going steady-ish income would be really good, and this work is interesting and well-paid, too. So… it would be nice to keep that going. 🙂

Egregors being what they are, and Miss Sugar’s long-ago NYNY thoughts about resolutions being on my mind, I’m actively trying not to make long-term plans or year-based goals right now. But that doesn’t mean they’re not in there. Not-so-vague plans to finish my third chapbook (finally), write another dozen or more glosas (and get myself that much closer to a finished first draft of a full-length manuscript), keep sending my poetry out, ideally to more paid markets this year… They’re all in there, stewing around and percolating away, along with all those good intentions about more physical activity, more vegetables, and less social media that, tbh, I just want to keep a damn lid on for now lest I start thinking of them as things I can just abandon as soon as Imbolg turns up. 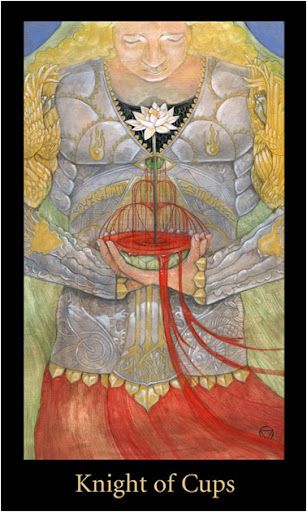 Knight of Cups – Mary El Deck – A person with long blond hair, a red skirt, and silvery armour with an eye over their heart, holds a chalice of blood out-of-which a lotus blooms.

I thought I might shuffle my Mary El deck until four cards fell out, just to see what chance might bring to my attention with regards to the New Moon spread suggested by Liz Worth. But, no surprises here, I had three fall out, one at a time, and then got three all at once, then two more, then one. Which is not what I had in mind – even if I did, in theory, get the three of cups in the “what can stabilize for me this year” slot, which is definitely not a bad thing.
So I said “screw it” and decided to call the first card that fell out of the deck my meditation card for this half of the lunar cycle.
It’s not a bad card to have drawn. In the Next World deck, the Knight of Cups is “The Love Song” and wears their heart on their sleeve. (The is the card of NRE, or so it would seem). Michelle Tea – who, like everybody, interprets tarot through her own experiences – has a lot of (negative) stuff to say about the swept-away feelings that the Knight of Cups can bring but she also says that, if the Knight of Cups shows up as a situation, then it means “something glamourous” is on its way, and you should go for it – use that burst of artistic inspiration to churn out a LOT of rough drafts for new things, or say Yes to that invitation from a pal to attend an event you might otherwise have skipped. Take some chances. Explore some new things. Julia Cameron would call this “refilling the well”, creativity-wise, and Michelle suggests a “be the knight of cups” activity/ritual that sounds a lot like the Ideal Day exercise, but with added mood-lighting, in order to get an idea of where the wells are that need refilling and where to direct all the intense, passionate energy you (in theory) have available.

Movement: Nowhere near enough. I’ve got some modeling work tomorrow, which will mean a good solid 1.5-2hrs walking, plus three hours of modeling, but I don’t know if this will be short or long poses or what, so we’ll see. None the less, getting back on the “ten minutes a day of yoga/weights” train would probably do me a lot of good.

Attention: Cat paw-prints in my back yard. Where the icy spots are on the steps and the sidewalk. What we have in the fridge that needs to be eaten up (we’ve been eating Solstice leftovers for a while now, and I’m starting to forget what we’ve got, beyond that.

Gratitude: Thankful for a warm day that let me chip the ice off my steps. For a haul of library books that are, so far, proving to be a tonne of fun. For having a few modeling gigs and a few days of temp work already lined up for the next four months (fingers crossed for lots more, but here we are). Thankful for a girlfriend who’s looking forward to seeing me, for a wife who misses me when she’s visiting her partners, for morning snuggles and date nights.

, a novella that I wish had been a full-length novel. It’s been a reminder that you can sketch out a whole story in just a few thousand words and, from there, see where the fleshing out needs to happen.

Creation: I drafted one poem. It’s a terrible draft, but it’s got some usable lines, so I’m calling it a start. Sock-extension continues apace, and seems to be doing what I want it to do, so that’s something. Unlikely to be done by the time I get on that plane, though. Oh well.

This entry was posted in All About Me, Wheel of the Year and tagged Lunar Cycles, wheel of the year. Bookmark the permalink.