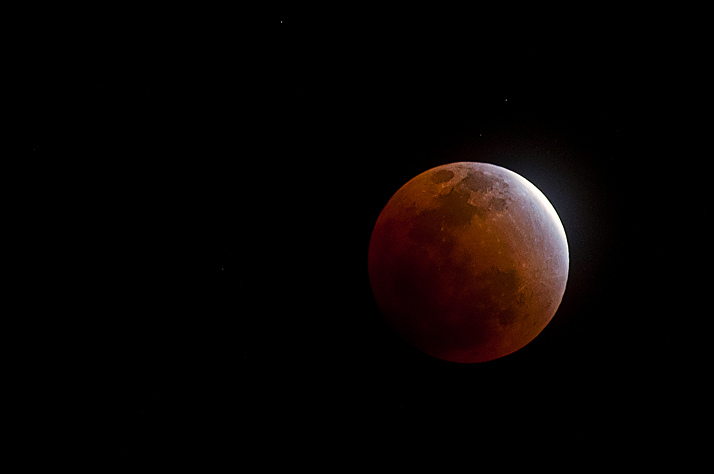 I gave my wife a book on backyard astronomy for Solstice. You can imagine that she’s slightly disappointed at the 36+ hours of steady snowfall (and -35C with-wind-chill temperatures) that we’re currently in the middle of, uh, “enjoying”, given that tonight is the night of the Super Blood Wolf Moon lunar eclipse.

Sounds fancy, right? The “blood” part of Blood Moon is about how the edge of Earth’s shadow makes the moon look rust-red. The “super” parts happens because the moon is at (or close to) its perigee – the point in its orbit that brings it closest to the earth. Astrologically speaking, the moon being both full and at perigee means that its influence is going to be that much stronger. Astronomically speaking, it means that the moon is going to look that much huger on the horizon due to being that little bit closer to the planet. The “wolf” part just means it’s happening in January. (I don’t know why, but hey, that’s why I call this one Cold Moon instead of naming it after an animal whose habits I know very close to nothing about).

Lisa Stardust, over at Hoodwitch, says that Scorpios (meaning me, among others) need to pay attention to root chakra stuff right now. The root chakra – located at the perineum – pertains to stuff like security, safety, survival, grounding & being in your body, and pretty-much everything under the “Basics” section at the bottom of Maslow’s Hierarchy of Needs. If your root chakra is kind of messed up, it can show up as being ruled by either fear or greed (or, y’know, both[1]).
I’m over here going, basically, “No kidding”, since I’m waiting for a cheque to come in and hoping that I’ll be able to pay the rent on time this coming month. >.>
Over at Elite Daily, Valerie Mesa is telling me that this particular eclipse is all about listening to, and celebrating, your soul’s truth. She says:


Where were you on Aug. 21, 2016? (If you can’t remember, take a moment to browse through your social media, and if not, no worries. Eclipse effects usually occur up to six months before, and after.) Secondly, how have you been sharing your unique gifts and creativity with the rest of the world throughout these two and a half years? The reason I ask is because this total lunar eclipse, aka Wolf Moon, is your grand finale.

Whelp. Part of why I do these new/full moon posts is so that I have both some kind of a micro-bioregional almanac and some kind of a record of my (attempts at) personal magico-spiritual & psychological development. So I looked it up. In late August, I had just started my life-coaching sessions, was (a) still reeling from a painful breakup that had happened about six months earlier, (b) looking into sacral (2nd) chakra care as part of my then-ongoing Queen of Cups project AND (c) I was starting to understand the the Queen of Swords is a card about boundaries and hard lessons rather than one about – as I had previously understood – being a Huge Disappointment to the people around you. I was, in short, trying to get the hang of boundaries and interpersonal connection, and to stop feeling so awful about my sexual desires.

Where am I now? Well… I’d say I’m definitely doing better. Better boundaries. Actively stopping myself from chasing after people who will be bad for me (and noticing that earlier). Taking romantic chances on people who have already got a track record of showing up for me and whose interests and desires actually dovetail with mine in significant ways. Backing off with better grace and a (marginally) shorter recovery time when people say they’re not interested in what I’ve suggested we could get up to. Feeling better showing sexual interest in people and negotiating the kinds of sexual relationships I have. Understanding what my anxiety feels like. Recognizing when I’m getting capital-A Anxious and/or when I’m dissociating/leaving-my-body, and mitigating that stuff with more success.
I don’t know that this is any kind of a “grand finale”. I certainly hope not. But there has been a solid evolution in terms of personal growth and interpersonal connections, so I’m calling it a win. Job well done, Me. 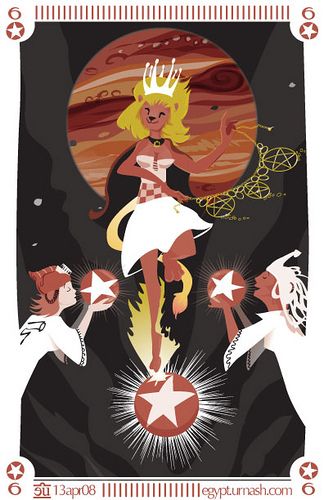 Tarot of the Silicon Dawn – Six of Fire – A triumphant fox in a crown and a fancy frock with the planet Jupiter in the background. Below her, a couple of people (who might be acolytes?) ooo and aah.

Considering the above chatter about calling my personal growth a win? I’d say this card (which I got by shuffling until something jumped out of the deck) is pretty apt. Thanks, deck! 😀
This is totally a card of “Ride that tiger!” Of “Go you!” and “Keep doing what you’re doing!”
Which is a nice message to get in the days leading up to things like impending, romance-related travel. (The next New Moon happens the day before I fly back home, so I’m going to try to remember “Keep doing what you’re doing” as I get ready to cross an international border, meet my new metamours, travel without my wife for the first time in years (ha, since 2016, actually), and see my new girlfriend in person for the first time since we officially started dating).

Movement: Mostly just walking, and dressing for the weather. I have definitely NOT being doing ten minutes of yoga/weights per day. Not even close. >.> Woops.

Attention: Paying attention to things like the rat tracks in the back yard (they still live under the neighbour’s shed, but… I have Concerns), the weather (I have an early morning tomorrow, and the amount of snow we’ve got is suggesting I should head out the door a solid 20 minutes earlier than I hypothetically need to… Yeeg…), and the mail box (has my next paycheque arrived yet, or not?) Not great things to be directing my attention towards, per se, but relevant none the less.

Gratitude: Grateful, in particular, for a metamour who was able to defend my computer from malware and get it working again. Also grateful for a wife who adores me, and a girlfriend who’s excited to see me in person soon. Grateful for a Productivity Date with a writer friend and for a number of social get-togethers with friends (impending and recent, planned and impromptu). Grateful for partners who like it when I read to them. Grateful for a poem finally arriving after several hours of essentially doing “morning pages” in the afternoon.

Creation: I finally wrote a fucking poem! AND I applied to present selections from my Femme Glosa Project at a women-and-non-binary-people arts festival happening in town, this August. I won’t know if I’m in (or not – but fingers crossed) for another few months, but I threw my hat in the ring, so there’s that!


[1] Like “White Culture has a Root Chakra Problem” is such a meme waiting to happen, not the least of why being that I – a white lady – have happily just absconded with the word “chakra” (Sanskrit) and the concept of “Muladhara” (from Hinduism) to point out that Western Culture’s heavy hook on both fear (mongering) and greed (and the environmental degradation and shitty labour rights that come with it) are probably all the same problem.

This entry was posted in Wheel of the Year and tagged astrology, Lunar Cycles, tarot, wheel of the year. Bookmark the permalink.