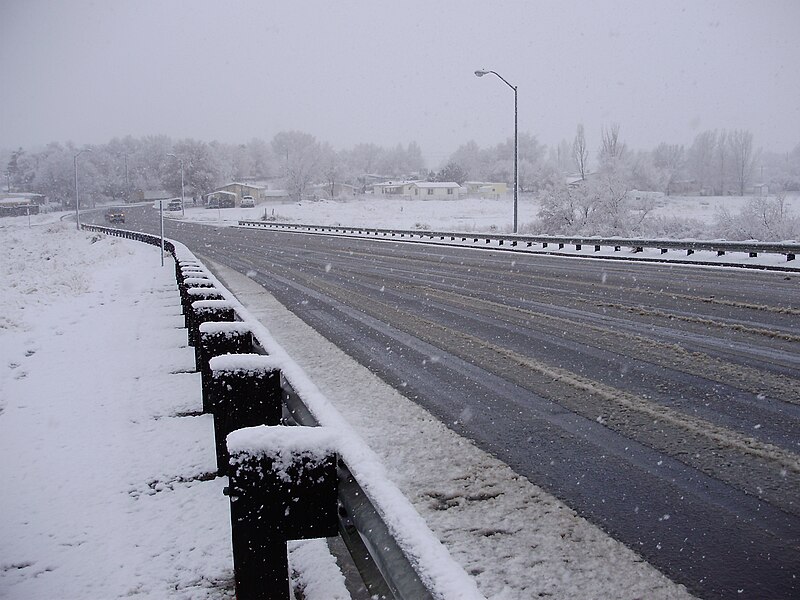 “View southeast along a slush-covered Errecart Boulevard from the Humboldt River Bridge during a snowstorm in Elko, Nevada” – Photo by Famartin via Wiki Free Images.

“Slush Moon”? So appetizing, right? I know. But it’s that time of year. The temperature is going to be zig-zagging back and forth across the frozen line for the next few weeks, melting the winter’s vast store of snow during the day and then freezing the run-off into ice over night.
I am deeply, deeply not looking forward to this, but I’m also seriously hoping for a slow melt-season, because this much snow turning to water all at once would spell flooded basements for just about everyone I know who has one.
So here we are.

Two weeks ago, I put away the Solstice decorations. Two weeks from now, it’ll be Spring Equinox. I’ve spent this past week essentially going to ‘Sexuality School” online and miraculously staying somewhat on top of my ten-minutes-a-day of exercise stuff, albeit by the skin of my teeth.

Ms Sugar wrote something the other day, and I find I’m relating to it a little. I’ll be forty before the year is out, and I feel like I’m “running out of time” to make changes that’ll stick. Some of those changes are the sex-related stuff I’ve been talking about over on Syrens. Some of them are more basic. Eat more vegetables. Become a better gardener. Stave off arthritis and help my body get stronger. Figure out how to parlay this university-funded casual-hours contract into a sustainable, long-term, but still casual-hours, income stream[1].

I feel like I’m constantly starting over, picking up the dropped threads, trying to find a way forward where I get to take care of myself, long-term, and get to have the freedom I want when it comes to how I spend my time, energy, and attention.

Silicon Dawn Tarot – High Priestess – “[… The] High Priestess get things *done* because she is *connected* in a way that few of the others down in the Earthly half of the Majors are. […] The Priestess is busy consulting her Higher Self *right now*”.

I chose this card for my tarot meditation.
Maybe it’s an odd one to choose, or maybe I’m pulling it because I know I’ve got a little ritual planned for later today – one that I’m nervous about, but one that I hope has some effect – and I want as much help as I can get.
The High Priestess – The Seer, The Inner Voice – is the conduit between the word-using mind and the deep ocean space of everything else in you. The connection between conscious and unconscious. The union of opposites.
As I try to get back into doing regular glamour work again (again, again… even as I type this while wearing a fuzzy bathrobe and flip-flops), as I keep trying to put myself back together again, I think it’s relevant to think of the High Priestess, how she can be in and of two (or more) worlds at once while keeping everything connected.

Movement: Some yoga. A couple of long walks (commuting, basically). Some weights-work. Some dancing.

Attention: Root chakra stuff. Where I am, and am not, holding muscle tension. What feels good. What makes me nervous.

Gratitude: Afternoons spend with pals. Time for long baths. A new Toby Daye book to devour. Sunny days, even if they’re cold. Unearthed summer veggies filling my freezer. A writing date planned for the end of the week. Kisses from my wife. Catching-up chats with my girlfriend.

Creation: A lot of personal essays. One ritual (that’s, admitted, still kind of being done on the fly). Plans to start turning all of the above-mentioned inspiration into poems (or at least drafts of poems) later this week.

This entry was posted in Wheel of the Year and tagged Lunar Cycles, wheel of the year, wishes. Bookmark the permalink.