Instructions: “Now would be a good time to check in with your personal Powers That Be (PTB) about your goals“. 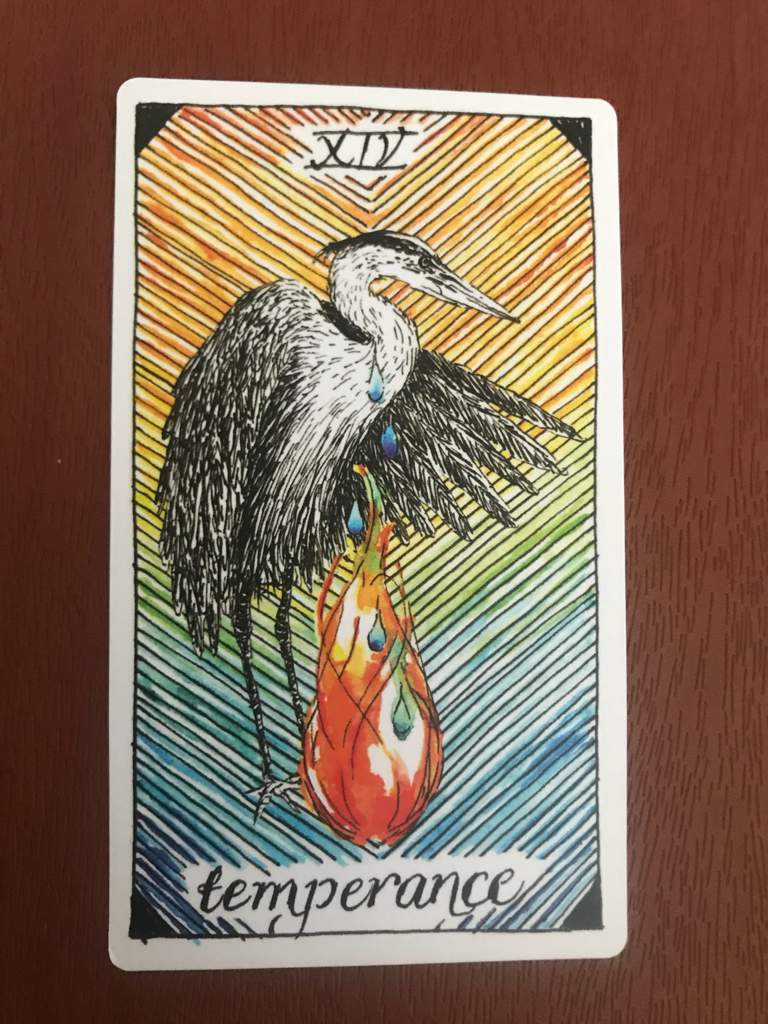 Tarot Cards: I picked Temperance for this one, because of how it relates to both “union of opposites” endeavors and, more broadly, to cooperation and compromise.

See, the whole “check in with your deities (etc)” prompt… I took a “radiomancy” approach to my tarot cards today and just… shuffled the deck until something fell out.
What fell out was this:

Empress crossed with the King of Air. Related Influences: Seven of Air vs Seven of Fire.

The Empress (which is what my whole project is about) crossed with – or is that brought about through? – the King of Air. The two other cards – both sevens, which means they relate to the Chariot and its “Get Up / Wake Up, and GO” energy – read as “obstacles” vs “helpers” or a case of “what do I need to let go of” vs “what do I need to act on/with”. Influences to be taken into account, if you will.

As far as messages from My Ladies go? This is… very relevant, nothing unusual, and… basically confirming stuff I’m aware of already? Unless I’m missing something?
The diametrically opposed sevens: The seven of air vs the seven of fire. Shame & avoidance vs Courage & conviction.
This has been my problem for ever. I push towards the thing, I get stuck, I regress, I push further, wash, rinse, repeat. Part of me reads this as just, like, “The struggle is real” with a side order of “Also, healing works in spirals and is not in any way linear, and there’s going to be points where you’re making a lot of progress very fast and there’s going to be points where you’re seriously feeling stuck and like nothing is changing”.
But, with this specific project in mind, I can also read it as the overthinking stuckness and “freezing” that I experience literally butting heads with the vitality and bravery that it’s going to take to navigate those Stuck/Lost feelings.

The one card I’m not sure what to make of is the King of Swords.
This card could be a reference to my tendency to over-think things and to how researching The Thing is not the same as doing it. But – while I don’t usually read upright cards like this – the fact that the King of Swords is upright suggests that maybe this is something about, well, what my wife called “Cognitive Behavioural Witchcraft”. The way I use magic and ritual to kind of reroute my neural pathways and get myself to, hopefully, stop believing the old tapes and, hopefully, stop making the same set of mistakes.

And… it’s not inaccurate. Sometimes my readings look more like “Yep… that is definitely an accurate description of my situation…” rather than “Wow! That’s some useful advice as to next steps to get where I’m going!”
That said, I’m choosing to interpret this as a “Yes, keep using your Very Smart Brain and your magical skills to unblock your sexual blocks and further develop your shame resilience! It’s going in fits and starts, but it’s working!”
With any luck, I’ll be correct in this.