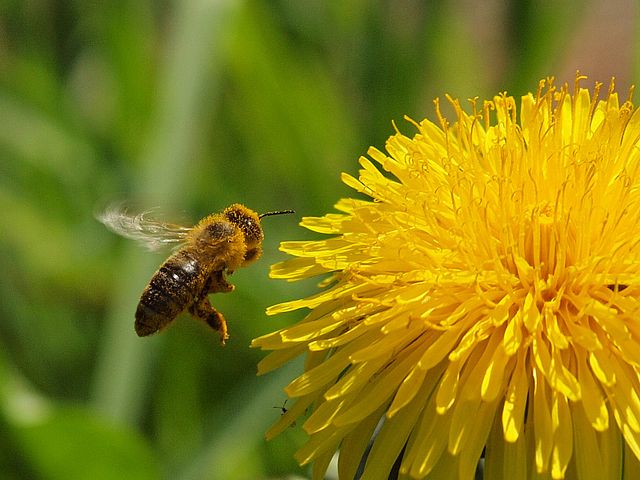 Technically there are three harvest-times for honey – in Ontario, anyway. The first is happening right about now. (The second, for those who are wondering, happens around Lammas – for darker honey from goldenrod and fruit blossoms – and the third happens just before Samhain and is when you harvest honey from late-blooming asters and stuff like buckwheat). So I’m calling this the “honey moon”, even though the roses have – just barely – started blooming in the neihbourhood and should be busting out all over the place before Summer Solstice hits.

My land-lady’s husband came by this morning and mowed the “lawn” – which, alas, included the tops of most of my yellow seed-mustard plants AND the tops of 2/3 of my ground cherries. I need to put in some kind of a fence or something so that (a) the ground ivy can’t get in and do it’s job (preventing soil erosion) while also disguising my food plants as a weedy patch, and also (b) so that my food plants are properly fenced off from the dandelions and ground ivy that cover the rest of the yard and, ideally, protected by said fence from the whipper snipper.
I’m not hugely worried – it’s early yet – but I would like it if I actually got some fruit off the ground cherries…

There are some significant changes happening on the home-front right now. My lovely wife has moved into a new shop space (above ground, and considerably less expensive) which is taking a lot of pressure off me, money-wise (thank you, all the gods) and I’m looking at taking a step further along one of my many career paths, and have an interview to that end coming up next week. It may or may not get me anywhere, but it’s worth a shot and I think it could be good for me in more ways than one.

As is my somewhat lazy tendency, I didn’t so much shuffle the deck as cut it at random to get my first three cards. My fourth card is a jumper which… that’s a nice card to have jump out of the deck at you, I don’t mind saying.

What am I learning at this time: Maya / 8½ – one of the Silicon Dawn’s “bonus” cards, and all I could think when I saw it was “Accurate…” Maya is a dominant babe with a couple of submissive playmates, which… . Described as the child of the High Priestess and the Devil, Maya is your own wildness, your willingness to prioritize your own pleasure over whatever Shoulds are squirreling around in your head, your willingness to go on an adventure, your sense of play. It’s an explicitly sexual card that asks you specifically to loosen up in order to get what you want. This is very-much in line with what I’m doing, both in terms of glamoury and in terms of my Empress and Notice Pleasure projects.

What am I teaching at this time: Ace of Fire – I… am not sure what to make of this. Like, it’s a wonderful card to pull. Very driven. Very passionate. It’s a card about spiritual growth (believe it or not) and energetic potential. It’s a card about cultivating confidence, optimism, and curiosity. It’s about daring to take risks, expressing yourself, and inspiring others. Egypt Urnash’s own write-up for this card asks “How do you want to transform yourself today” and its explicitly femme rendering of a dancer in the flames, of the destruction that precedes rebirth, reminds me a LOT of the Judgement card from the Mary El deck, of “YOU are the thing that’s burning”. In-so-far as I’m trying to re-learn how to burn, how to literally run energy through my body the way I used to do without even knowing I was doing it, how to re-program the energetic pathways in my own brain, I’m also trying to teach myself to do this. But am I teaching this stuff to anyone else? Kids, I have no idea.

What am I overthinking at this time: White Galaxy Rose – This is another one of the “bonus” cards in the Silicon Dawn deck. I tend to think of these cards – the black and the white galaxy roses – as being Maya’s two playmates. I also tend to think of them as two ways of looking at infinite potential (and, as such, they’re linked to the Ace of Fire, above, and also to the Magician card). The black rose, I tend to understand as “the beginning of everything”, whereas the white one? It’s very “I have no idea what’s going to happen next. It could be anything”. There’s a certain amount of “flying – or maybe creating the cosmos – by the seat of your pants”. That said, thanks to the power of search engines, I found Egypt Urnash’s old LJ, of all things, and she had this to say:

For me, they mostly seem to come up if I’m asking the deck a yes/no question. The black one is NO, the white one is YES. More precisely the black one seems to be DUDE NO, JUST NO, WHY ARE YOU EVEN ASKING ME THIS, YOU TOTALLY KNOW IT’S A NO, and the white one is WELL DUH YES? WHY DID YOU EVEN THINK IT MIGHT BE OTHERWISE?

So… I’m overthinking my YES?
That’s… not unlikely, actually. I do that a lot. Second-guessing myself, questioning if I really want what I want… okay, cards. Duly noted. Will try to be like September and say YES more often.

What am I becoming at this time: Queen of Earth – This was the card that jumped out of the deck. Solid, sure of herself, openhearted, “fecund and generous” as Egypt Urnash describes her. She has lots of resources (social connections, financial means, a full larder and a spare bedroom) at her disposal, and is materially & financially secure enough both to share, and revel in, her own abundance. Trustworthy, caring, warm, and reliable, she’s also able to both make good decisions from a place of surety and security (rather than scarcity) and to luxuriate in creature comforts. She heralds abundance and joy. Ye sweet, beloved gods, YES. This is what I want to be becoming. 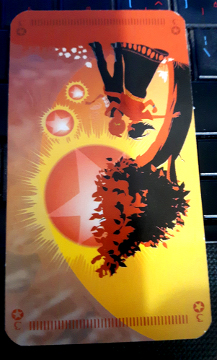 Tarot of the Silicon Dawn – Three of Fire (Inward-Facing) – Two kiddos under a tree, watching the lights.

So! If I take all of the above, how does it relate to the card I drew (same method) for my tarot card meditation? The card I drew was the Three of Fire which, in the Silicon Dawn deck is the three of pentacles, which she calls “Creation” and describes like this:


“Will is in harmony with the world. Here is what you can make, if you dare. All of this is yours. […] Our creation is done; now is the time for you to go play in it.”
[…] Spring comes to all of that vastness at once, and here it is – flowers blossom, bees buzz, and it’s time to get started doing something. So: Go make something to equal the artifact you live in. Dream big and get started.

Well. Spring it is, and that couldn’t be clearer.
Wish me luck.

Movement: Moon Salutations. Lots of walking. A certain amount of desk-dancing while I write this, wich plans to go Actual Dancing this Saturday night.

Attention: Watching this chest congestion like a hawk, because I do NOT want to get sick (at least not for another week – at which point I’ll have the better part of ten days to get myself healthy again, and I’ll deal if that happens). How I catch myself and pull back in situations where I’m about to make a connection (with another person, human or otherwise)… it’s… something to think about, notice, and probably one of the many instances where I’m pulling back from a YES that I do, actually, want to offer. So… Thinky-thinky.

Gratitude: A writing date with a friend. My wife’s new shop space and the financial flexibility that’ll give us. My upcoming interview. Continued modeling work. A garden that’s full of radish and mustard greens and, incidentally, a tonne of ground ivy that I can steep into a tea to combat bronchitis. The smell of crab apple and lilac blossoms in the air. Time to take good care of myself when I’m feeling under the weather. Running into a friend while doing groceries. Flirty interactions with my sweethearts. A wife and a girlfriend who love me.

Inspiration: Pulling tarot cards for poetry inspo. Listening to my girlfriend’s stories about her religious experiences as I reach out to my own gods.

Creation: Most recently? Two (very long) poems, that need whittling down, but are a good place to start.