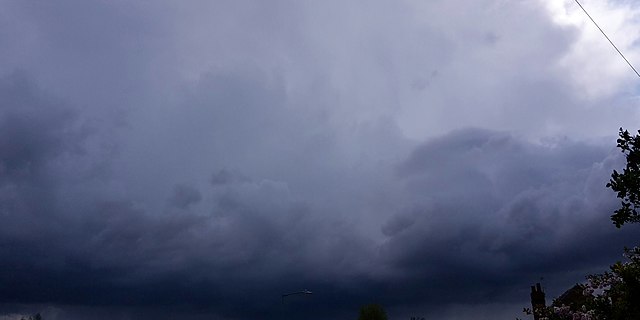 Thick, purple thunder clouds over a probably city-scape that has been largely cropped out of the frame. Photo by “Rubbish Computer” via Wiki Free Images.

Berry Moon has come and gone – my freezer has a big bag of service berries and a smaller bag of red currants to show for it – and it was very hot and very dry. My garden staggered by on 14 gallons of water roughly every other day, but I’m sure it’s as relieved as I am to be getting heavier waterings than my watering can and I have been providing.
Thunder Moon started a little over 10 days ago (at the time of this writing), in Leo, just before Lammas, and right around when I was getting home and settled after a week-long visit to my girlfriend’s place and the last of Mercury Retrograde kicking my ass on the way home. It’ll be full, in Aquarius, later this week, but I’ve got some time, so I’m doing the scribbling now.

You guys, my squash are not doing so well.
Technically, I’m not sure ANYTHING is doing well – my chard is okay, and my two tomato plants are doing their thing, but they’re giving me maybe 2-3 cherry tomatoes per day, put together, which is… not a lot. My beans have started flowering, and they look like they’re doing just fine. But the cilantro and dill have gone to seed (fine – I’ll use the coriander and the dill seed just as happily) and the basil and anise hyssop are… struggling. The ground cherries kind of just aren’t. And the squirrels ate about 1/5 of my one and only pumpkin and seem to be going after any fertilized squash bebes they can get their hands on.
Anyway.
I’m kind of like “Fuck it. The clover I sow won’t germinate. I dig a heap of manure compost into the ground and plant a compost-loving-plant like squash in it and… not a whole lot happens. Like, yes, I totally let the ground cover cover the ground. It’s what it’s for. But is it actually that bad? Is the apple mint a problem? Because it’s supposed to deter squash bugs but didn’t deter them much (the bottom of my shoe, however…) and maybe they are crowding the squash? Should I just yank out the smallest of them and give the rest some extra room?
Maybe?
So that might be a thing that I do with the squash, in the hopes of having the remaining ones get bigger and start producing Actual Food.
Beyond that? Beyond that, I have a basket of zucchini on my counter, half-of-which will go into my freezer, and plans to do similar with as many peppers, nectarines, and roma tomatoes as I can swing. Sweet peppers and greens, too.
Also, I’m starting to watch the apples and crab apples that grow near my laundromat and on my way to various libraries, because they’re ripe or ripening and, while I have a LOT of apple butter still lying around after last year’s bonanza, I’m pretty much not someone who say No to free food, so I will probably at least make some pies, you know?

I’ve been reading T. Thorn Coyle’s Sigil Magic and, in line with that, have been asking myself “What do I want???”
Those three question marks are intentional.
Sometimes “what I want” is simple, if not necessarily easy. I want my old, kind of broken, computer to keep working for another few years. Or I want the shredded comfrey leaves with-which I mulched my squash and beans, to translate into a lot of squash and beans for my kitchen (I think I need a lot more comfrey, and a couple of years of adding this kind of mulch frequently and regularly, to really get that, though). Or I want a machine that will wash three racks of dishes all at the same time, just by turning a dial and pressing a button. Easy. Specific.
And sometimes they’re not that.
Sometimes “what I want” is nebulous and fearful and teary and basically boils down to “I want this not to be happening. Please make this not be happening”. And I don’t even know what to do about those. The things I can do to mitigate them, I do, but most of what I can do is so negligible they seem utterly useless, utterly hopeless.
And sometimes they’re not that, either.
Sometimes they’re big – no less specific for being big, but big none the less – and require a lot of trust and a willingness to let a lot of it be out of my own hands as to whether or not I get what I hope for. Sometimes I feel guilty for wanting these things. Not because they’re “bad” or even “selfish”, necessarily. But because they’re just so substantial.
Sometimes I’m afraid to look at them. Mostly, I think, because I’m afraid if I make some kind of definitive statement about “This is what I want. I want XYZ”… and then I’m wrong…
And, yeah… Like, I just had to literally ask myself “Okay, so… what’s the problem? You want a thing, you try it, and it doesn’t fit as well as you thought, and…?” and the answer is some wordless jumble of “sunk costs” and “wasting other people’s time/energy/patience” wherein “other people” includes both human being who share my life with me and also various deities who showed up and helped with the opening of doors and so-on.
…Which is maybe a silly thing to feel?

Chani’s horoscope (for Scorpio) for the recent New Moon says:

With this new moon, I know that good things flow towards me all the time, but it’s my job to remember to flow with them. To prepare a space for them to land. Take root. Grow tall and wide.
I am an excited host for the arrival of all blessings. I know that nothing squashes good fortune like an expectation of what it should look, be, or act like. I remind myself that cosmic gifts come it all kinds of bizarre forms. The more I trust what shows up, the more I am able to work with it for as long as it is with me. Osho Zen Tarot – Playfulness (the Page of Fire) – A joyful clown dances in a cloud of sparkles. 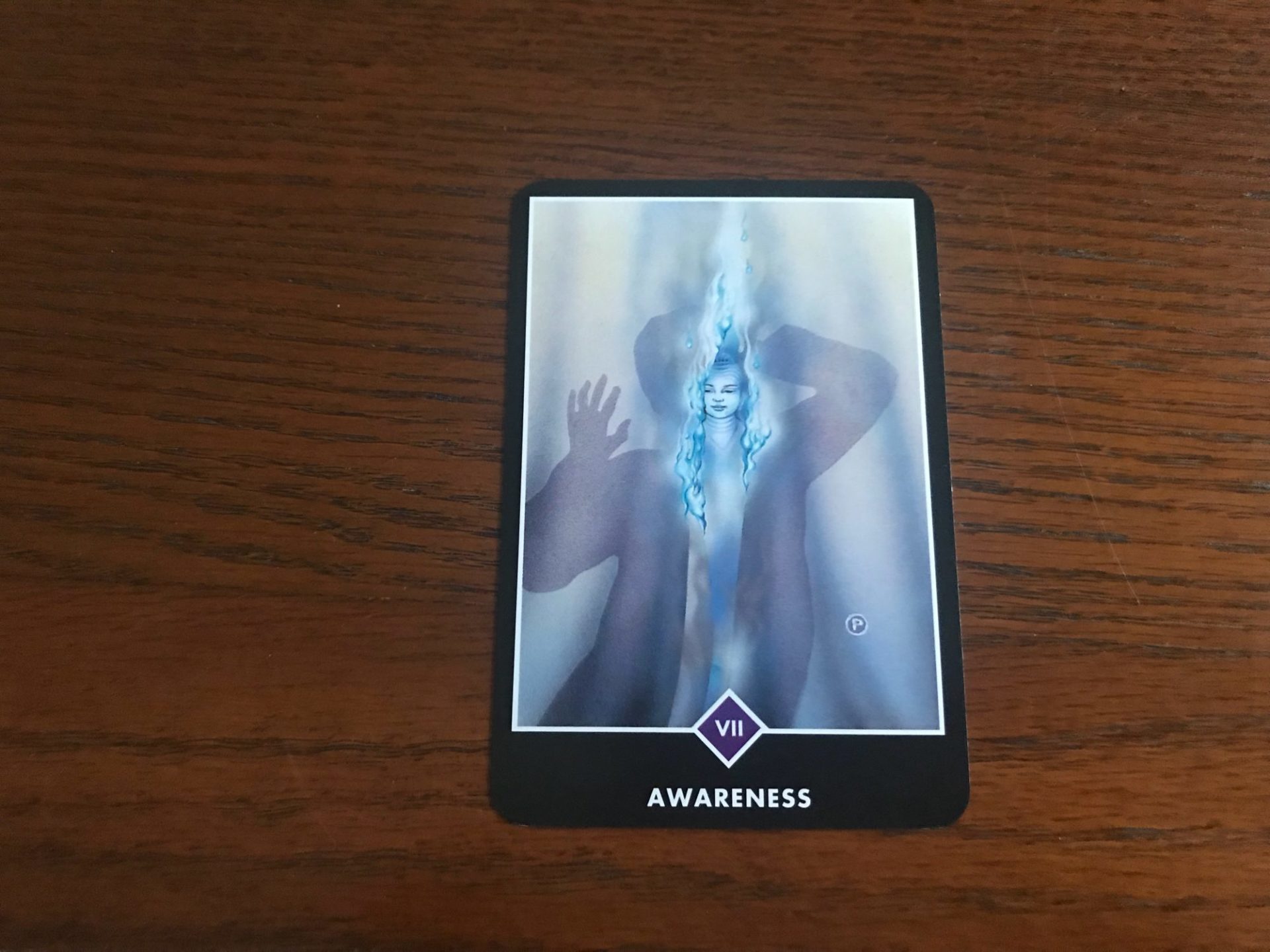 Osho Zen Tarot – Awareness (the Chariot) – A silhouette on a veil is burned through by the cold blue fire of enlightenment, a bodhisattva emerges.

Movement: Moon Salutations on the dock of a metamour’s cottage + climbing those 69 steps up and down repeatedly over last weekend. Walking to and from my week-long temp job. Walking all over DC’s downtown checking out galleries and museums with my girlfriend + dancing in her back yard. Hauling home 30+ lbs of groceries before the cottage trip. Taking a long, rambling walk to, and then through, the Experimental Farm and then circling back via the arboretum. Sex that, while wonderful, also reminded me just how little stamina I actually have.
Nothing super heavy, but lots of good moving around.

Attention: Listening to The Shondes (uplifting tunes for the win!), trying to identify trees in on the Experimental Farm and in the Arboretum.

Gratitude: Thankful for being able to pay for plane tickets to DC twice a year. For a long, easy date with my wife, yesterday. For grilled cheese sandwiches. For cherry tomatoes off the vine. For unexpected temples and magical group rituals (uh… more on those later). For full-day modeling gigs. For thunder storms that rattle the windows. For a break in the heat. For breezy sunshine. For dinner with my sister and drinks with my brother-in-law in the same week, even though they both live out west. For sex. For poly-family photos and vacations.

Inspiration: Brian Eno’ and Peter Schmidt’s “Oblique Strategies” deck, as performed by this random prompt provider website. I like “remember those quiet evenings” and “a line has two sides”, so far, and find “Once the search is in progress, something will be found” to be kind of comforting, tbh.

Creation: Remarkably little, but I did write a scrap of something that might turn into A Real Poem.

This entry was posted in Wheel of the Year and tagged Lunar Cycles, state of the garden, tarot. Bookmark the permalink.

One response to “Full Moon – Thunder Moon Waxes and Crests”