We’re well-past Imbolg at this point, even though I haven’t changed the wreath on the door just yet.
It’s been seven weeks, or there-abouts, since I started talking about doing shadow work around money stuff. I’ve been reading books, taking notes, journaling, and doing rituals and… there seems to be some evidence of progress? At least a little bit?
But, kittens, it is HARD.
It’s hard to drag my head/heart into believing in the possibility of things getting better and easier, particularly right now. It’s as hard as convincing myself of my own “worthiness” in other areas for, most likely, related reasons.

I’ve sent out one chapbook and one microchap on sub, to different publishers. I’ve got one glosa slated for publication in the near future, and have more glosas – thirteen of them – submitted to three paid markets. I applied for a GRANT even. So I feel like I’ve been pushing my poetry quite nicely – reaching for that wider audience, growing through communication and writing projects – while keeping an eye on being able to do this for money, one way or another. I mean, we’ll see what the publishers think of it, but I’m keeping my fingers crossed and feeling at least a little bit confident over here.

On the advice of my wife, I have been doing more ritual stuff. Long baths, mostly, since that seems to be where I do most of my Big Magic, and also since water is SO very much my element. But there have been little things, too. Renewed commitment to doing Moon Salutations every day. Singing every day – usually by singing along with a playlist called “Reminders to Self” that’s full of uplifting tunes and a lot of folk music. Doing more little magics around the house, and being (fairly) consistent about them.
It feels good. 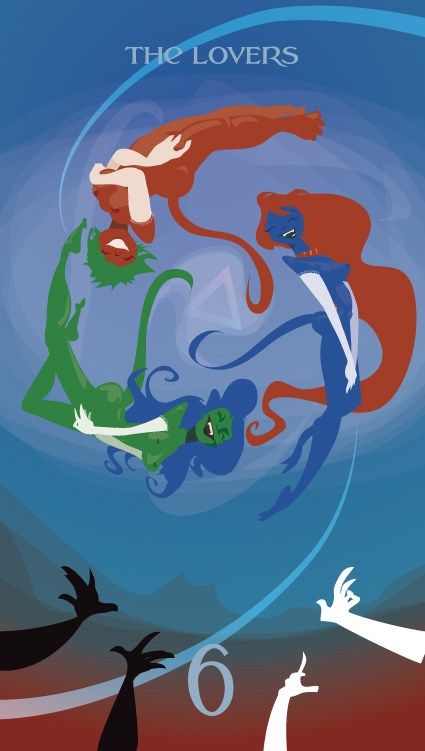 The Lovers – Tarot of the Silicon Dawn – A femme4femme4femme triad with green, blue, and red skin and hair, all with tails, all wearing white opera gloves, fly and circle together, clearly having a wonderful time.

I pulled a tarot card today, asking “Where are my blocks, actually?” and the card I pulled was The Lovers.

So, while I will be holding this card in my mind as a meditation card – keeping in mind the ideas of chosen family, polyamoury + lovers, second chakra stuff in general, showing up, teaming up, and collaborating – I’ll also be asking myself how this relates to (1) the card that Witchy Wisdoms pulled for me asking the same question (she pulled The Chariot, and said I needed “serious balance” to move forward) as well as (2) any fear/guilt/shame around things like receptivity, abundance, gratitude, and trust.

Movement: Yoga every day! Not much else – besides shoveling the walk multiple times – but I havebeen doing that!

Attention: I’m actually trying to watch where my thoughts go, these days. Trying to head resentment off at the pass. Trying to think – like Interior Monologue – in terms that are more about Trusting In Abundance and/or The Universe and trying to focus on “Things will get better in a matter of days/hours, we’re going to be okay!” rather than “Aaaaaaaaaaaaaugh things are very bad RIGHT NOW!”

Inspiration: Tarot cards, music, the witches I’m taking Ms Sugar’s course with, prompts from my GodSelf, the occasional Good Results that come rolling in to tell me to keep at it.

Creation: I finished a microchap! One of the publishers that I want to have as my own tends to publish stuff in the 8-16 poems length, so the chapbook I originally sent their way was a little too long for what they look for. BUT they did recently open submissions for microchaps so I took an unfinished series of linked poems – based on the Suit of Cups and following the Wheel of the Year – and wrote (and polished, obviously) the last few pieces I needed to have a complete set. I’m pleased with it, and I hope they will be, too.