Instructions: I do this because I have to believe that this has all been worth it. All this work, all this stress, all these sleepless nights, all this anxiety, everything!So, let’s make sure it is! Push harder than you ever have this week. Push harder than you ever thought you could and then just a little bit more. I believe in all of you. Let’s make magic this week, kids. 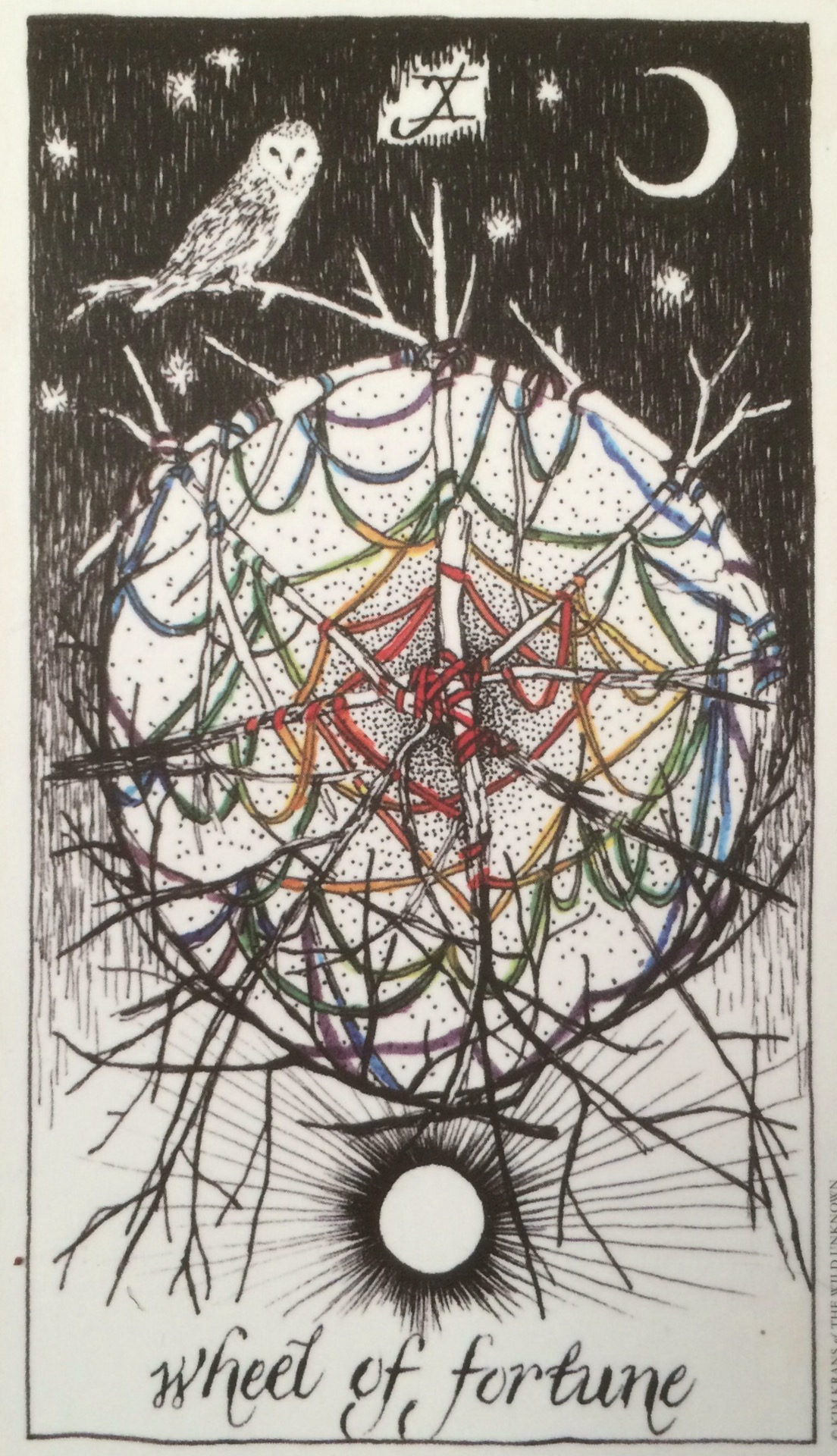 Wild Unknown Tarot – Wheel of Fortune – A ring of birch branches bound together with wild, colourful loops of ribbon. The sun, a crescent moon, and an own are all present.

Tarot Card: The Wheel of Fortune
I chose this card because… it feels like this is a big, leveling-up level Change. That’s why.

Okay. As last pushes go, this is a pretty literal one. We’re ten days into our move to the house I did A Big Ritual to be able to secure. The big push is to get the house entirely cleared out this weekend, with the garden being rescued and transplanted during the last week of May, when it’s had a chance to come up from underground.

And, yes, I absolutely decided, part-way through this two+ year cycle of NYNY, that I needed to focus specifically (or at least a lot MORE) on the material elements of The Empress, in order to get myself some secure housing plus a reliable income to supplement my gig-based career as an art model. So. Mission (somewhat?) Accomplished?
Go me!
But I also find myself looking at my original goals.
See, a long time ago, I said:

This project is about opening myself up, rooting myself solid, and becoming my fullest, most integrated, femme self.

And I know I have further to go on that front. I mean, yes, sure, There’s A Pandemic and, yes, I’m still in my second month of my new (year-long contract) job, and, yes, I’ve been moving for the past three weeks, so maybe it’s not that odd that I haven’t been churning out a new poem every week or staying on top of my January-era (pre-pandemic era?) goal of submitting poems to three+ paid markets every other month. But I look back at my goals, and I can see how well I’m doing with them. I have an idea of what my next steps are – even got confirmation of them via A Dream, which was pretty cool.

My wife said to me, last night, that she feels like this isn’t just moving into a new house, it’s moving into a new life.
We’re both experienced enough to know that “new life” doesn’t just happen. That you don’t change your behaviours without putting some work into it. But I have to agree that this feels a bit like that’s what’s happening.

In my recent Full Moon post, I wrote a little about wanting to do a Closing Up the House ritual once the garden is potted up and the house, itself, is empty. I think this is a good idea, and I have the symbolic items that will be involved in the ritual itself.
But, magically speaking, I’m still a little blurry on what I’m trying to accomplish.
The Cheat Codes Course I took with Ms Sugar (registration for the quite affordable second cycle closes TODAY, so you’ve got a couple of hours to still get in on it – RECOMMENDED) actually brought home how important that bit is. Most of my magic, over the course of ~25 years of doing the work, has been about changing things inside myself (Changing Consciousness At Will, to quote ye olde Starhawk), so when it took a LONG time for my magic to get anywhere, I thought it was because it was Slow Magic, rather than, say, me doing the physical/psychological work without getting the spellcraft to actually be effective.
But I would seriously prefer to not be closing up a condemned house (because: bought by a developer, it’s actually perfectly sturdy and good), with magic afoot, without knowing what I want to accomplish.

Because that’s part of the Last Big Push.

Am I giving the spirit of my condemned house permission to go, to let its body die early?
Am I asking its spirit to come and be the spirit of a birdhouse hung up in the big cedar tree in our new yard?
Am I offering it some bit of vestigial life in this fleece, these petals and feathers, this bone and hoping it can hang on a little longer?
What am I doing?

And, depending on what I’m doing, what else am I doing?
Am I asking for a last favour from the place that sheltered me for more than five years?
Or am I burying old habits with this handful of other dead material, and hoping they die with the house that deserves so much better?
What am I doing?

I have until Saturday to figure it out.

I’m writing this as the full moon wanes. We’ve been enduring an unseasonal cold front for most of the past week, but the service berries are still blooming their hearts out all over my (soon-to-be-former) neighbourhood. The scilla, crocuses, daffodils, and narcissus are blooming, too.
I watched the full moon in Scorpio come up, rose-gold, over the highway on-ramp for the last time.
My wife woke up at 3am and she knew. She knew that the house knew we were leaving.
Houses want to be lived in. It’s what they’re for in the sense of “This is my life’s purpose”. And we’re leaving it and, in 5-6 months, it’ll most likely be rubble.
As you know, I have some Feelings about this.

I can’t help thinking about the way (paleo-anthropologists and archeologists theorize that) my long-ago ancestors would ritually(?) destroy a house after living in it for generations.
What is a fit offering for a house that its spirits might be phoenixes and rise to fill the houses built on their former bones?
A broken dish coupled with the charred remains of a very, VERY over-cooked chicken heart crushed and scattered in the basement?
A wishbone tied to one of the spare house keys with a scrap of yarn and left in the hollow under the front steps?
Puddles of vodka sploshed across the linoleum tile in every room?

I’ve made a start of it by burning one of my coconut-beeswax votives and offering a chocolate truffle, but I think there needs to be more.
I’m trying to think of adequate ways to say goodbye.

We started moving things into the new place… about ten days ago. Art and furniture and a million books. There’s a long way to go yet, but we’re getting there.
Sunday was our last night in the Old House. We’ve moved our bed, a lot of our living room, and at least some of our kitchen, and have the internet and phone lines hooked up at the New House. Mail Forwarding and various utilities transfers have been accomplished.
We are so, SO exhausted. All. The. Time.
But we’re getting it done.

Perhaps it won’t come as a surprise that the card I pulled on the night of the full moon in Scorpio was the Ten of Earth. The card that means “Home, Safe, and Secure”.
I’ve been keeping that card in mind with every box I pack, and unpack, and re-pack; with every 5:30am anxiety spike that sends me spinning out with overwhelm; with every meal we cook in a kitchen whose layout we’re still learning.
Home. Safe and Secure.
I’m starting to get it through my head that there’s no such thing as a Forever Home – at least not in the sense of a single building. But I hope that this place we’re moving into, with its big windows and colourful walls and lack of stairs, will be the place we put our home for a very, very, very long time.

Movement: I am (barely) remembering to do my yoga every night. This has involved, at least once, getting up in the middle of the night and doing it then. But I’m still doing it. The vast majority of my “movement” at the moment, though, is packing, lifting, and carrying boxes and furniture to and from the van we’re using to move everything from one house to another. My back and hips are SO deeply unimpressed right now. O.O

Attention: Learning the layout of my new house. Listening for signs of unease from our old house. Paying attention to how much sun our north-facing front yard actually gets and to which trees are growing in our (heavily shaded) back yard – hawthorn and maybe a choke cherry? And a LOT of cedar and Norwegian maple.

Gratitude: Thankful for this house. For a month of overlap between one lease beginning the other ending. For a van, on loan, for as long as we need it. For being eligible for the Emergency Benefit. For a metamour nearby who takes such good care of us. For a new neighbourhood with friends already close by. For living on a hill just above the river. For an internet connection that lets me talk to my girlfriend even though she’s very far away. For healthy loved ones who’ve made it through or else haven’t got it (yet). So very much so. Grateful for extra space. Grateful for magic, and for magic working. Grateful for my two, tiny work-from-home jobs that still exists, even on drastically reduced hours. Grateful that my wife and I make a really great team – even when we’re frustrated, hangry, exhausted, and sore. Grateful for all the love in my life. ❤

Inspiration: Uh… does spite count? Because I found a couple of books that I thought I’d literally thrown away, and now I’m using them to make transformative art.

Creation: I did an erasure poem! HaHAAA! 😀 Not gonna lie, it’s a little heavy-handed, BUT. I’ve done one. And, with any luck, I’ll be able to do a whole bunch more!