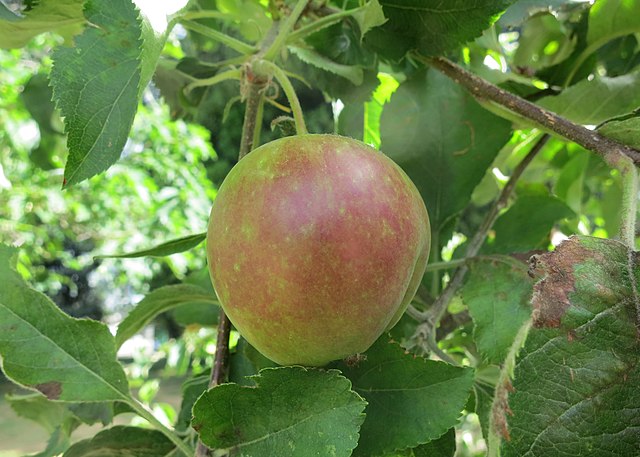 Ripening Apple – Photo by Ruth Hartnup via Wiki Free Images – A green apple, ripening towards red, hangs from its stem amid green leaves.

My altars are lit – after weeks of not making offerings in this way – and I need to make another batch or two of candles before the day is out.
There are big, dark clouds hanging low over the neighbourhood, promising more rain. My zucchini are loving it, and I’m appreciating the break in the heat.
Mr and Mrs Cardinal came by yesterday evening, along with a chickadee or two, to see if we’d left more birdseed on the window sill. We had a Palliated woodpecker stop by, and a young (and very hot – the cicadas were going hard, so you can imagine the temperature) stop by in the cedar tree for a moment in the shade and/or a moment of investigating our Cockatiel (and our plastic model crow) on the other side of the glass.
We introduced ourselves to our across-the-street neighbour, who – appropriately for the beginning of Apple Moon – invited us to harvest his apples and pears for making cider in a few weeks, so I’m excited about that.

It’s New Moon in Leo (or was, close to a week ago) and – go figure – I’m diving back into shadow work. Leo Season is basically Ego Season, after all, and while it can be a very King Of Wands time (and, yes, I’ve pitched myself for an expanded job description with one of my current clients AND participated in an open mic at a recent online poetry show), it can also be a point where our assumptions about Being Right need to maybe get questioned and challenged.
I’ve been Getting Messages – mostly, though not entirely, in the form of wasps and hornets landing on me, walking on me, accidentally coming into the house, and, in one case, getting trapped under my skirt, freaking out, and stinging me (can’t say I blame them) – about my own tendency towards getting venomous when freaked out about something, and I think I need to do some Work around that.

On a related (sort of?) note, I’m… having The Feels around hanging out with my Fetch. She’s a good kid. And I’m also like “Crap, what the heck to do with an athletic teenager??”
I pulled a card today, basically asking my Fetch “What would you like to do” and the card I got was “The World” which, in the Osho Zen deck, is depicted as a jigsaw puzzle. So I took her literally and found a website where I could do a bunch of digital jigsaw puzzles for free, and we/I did puzzles for a little while.
We’ll see if this sort of thing works in future, but I figured it was worth a shot.

I did a “New Moon in Leo” tarot spread, using the same deck, and what I got was:
A Place to Innovate: The Fool, Upright (The 9 of Earth Upright)
A Chance to Boost Confidence: The Emperor, Reversed (The Queen of Fire, Reversed)
A Way to Show Yourself Love: The Sun, Reversed (The 3 of Earth, Reversed)
(The cards listed in brackets are ones I pulled just to get extra information about each item)

What I get from this is:
A Place to Innovate: Literally ANYwhere. Just start something. “To Innovate” just means “to change up an established pattern”. Based on the “more info please” card, I could potentially read this as “Change up how you… [Rely on only yourself] / [Exercise Self-Control] / [Achieve a comfortable lifestyle]” which… hey. I said I was doing shadow work around exactly this stuff, so at least it’s confirming that I need to change up some stuff in this area.

A Chance to Boost Confidence: Look. Blame it on reading The Killer Wore Leather, but I almost want to read this as having something to do with dominance and my D/s relationships. The Emperor being all about Being The Boss and the Queen of Fire – in addition to being energetic, confident, dedicated, and having great sex appeal – is my personal mental idea of what an authentic, dominant femme can be (as opposed to, say, the Lord Domly Dom stereotype that I associate with the King of Air).

A Way to Show Yourself Love: This, at least, was easy to interpret: Acknowledge your skills and stop downplaying your contributions to things.

Flowering – Queen of Earth, Osho Zen Tarot – a woman with black and white hair, wearing a green dress and a flower crown, sits, cross-legged on a floating pink lotus. A full moon(?) rises behind her.

The card I drew for my Tarot Card Meditation was the Queen of Earth.
This is interesting because of how much King of Earth stuff has been showing up lately, and because of the “Place to Innovate” portion of the above tarot reading.
In some ways, at least, I believe I’m already the Queen of Earth. Note, I said “believe”. There are 100% Shadow Things in there that belie the ways in-which I’m not. I know I’m resourceful and generous, nurturing and thrifty, and I have a tonne of home-making skills – all of which are Queen of Earth Things. BUT I also deeply want to be taken care of, to not have to be thrifty and resourceful specifically because someone else is looking after that stuff for me.
So that’s something that I want to explore a little more.

Similarly, I find myself looking at the ways in-which the Queen and the King of this suit differ. I’m particularly thinking of how Michelle Tea (in her book, Modern Tarot) talks about them. She describes the Queen as someone who keeps her life simple and who can recognize that she’s rich in friends and skills, even if she’s not necessarily rich in cash. Whereas she describes the King as someone who’s comfortable accepting a good wage, spending money on things they value, and being rich in cash as well as friends and skills (which, itself, feels very connected to the “Know Your Worth” of Leo Season, as discussed by Liz Worth, linked above). And I find the difference she depicts – or maybe, tellingly, that I interpret from her words – shows me the various gulfs I need to bridge if I want to level myself up out of what feels a lot like a “four of pentacles” funk.

So, as I dig into my Suit of Pentacles / First-and-Second-Chakra shadow points, I’ll be keeping these things in mind.

Movement: Moon Salutations every night. Going for frequent walks with my wife in the evening. Occasional pushing of the tiny sail boat down to the river and back (with help, obvs). This is probably not enough movement, but it’s what I’m doing.

Gratitude: Blueberry ice cream. Backyard BBQs. Friends who live nearby. Home-grown zucchini. Long talks with my girlfriend. Money with-which to buy 1/4 of a pig for the freezer. Reading aloud to my partners. A zillion library books (Gideon the Ninth is so good, you guys). Snuggles with my wife. Shadow-related break-throughs. Our CSA box. A freezer full of vegetables. Hard conversations (I may not like having them, but I’m grateful that they’re at least possible). Being able to drink tea with my mom and have it feel comfortable and easy. Poetry.

Inspiration: As is frequently the case, other femme poets + tarot cards. But, on top of that: Kinky books. My recently-deceased colleague. Bats in the park. The river. The Leonids meteor shower.

Creation: While I feel a little bit behind, in terms of my poetry project, I have reached the point of having (technically) enough glosas to make a full-sized manuscript. Which I think is a pretty big deal. There’s still a lot of work ahead of me, but I’m feeling confident and proud of myself for making it this far.

Posted in divination, Wheel of the Year