The moon was full last night.
I spent the afternoon steaming cauliflower and kale (with bonus cauliflower and broccoli leaves thrown in), and the evening reading to my wife.
I’ve got more beets than I know what to do with, but at least beets keep for a long time and the corn (like the beets, it’s from the CSA) is finally slowing down.
Today, it’s raining. Heavy grey clouds and a forecast that going to swing between “light drizzle” and “downpour” until some time this evening. I’m making cabbage-and-apple salad and roasting potatoes. Enjoying that my kitchen is a little more functional than usual.

Chani Nicholas asks “What we have built, healed, and come into a deeper relationship with over the past six months?”
If I rewind the tape to the New Moon in Aries – Leaf Moon just beginning – it’s an entry about the initial COVID-19 shutdown, when all of my modelling work was evaporating, when I’d just, just landed a one-year part time job that’s turned out to be my main source of income ever since, and I was negotiating with my own GodSelf (a very gentle and easy negotiation, as it turned out, but I was nervous going into it for some reason) about over-riding my austerity practice in order to make sure we had a month of basics on hand.

Which… is a weird mirror of where I’m at right now.
The leaves are starting to fall. I’m making decisions about how I’m going to (hopefully) make my living for the next 3-6 months. Accepting more hours at my from-home jobs (hurrah!), acknowledging that the thought of taking buses and working in even un-crowded classrooms and community centres is… feeling a little too dangerous, at the moment, to do if I don’t have to. Working out ways to make sure that I don’t have to, including looking for further at-home work to pick up once (or just before) that year-long contract ends.
I’m stocking up, a little at a time (10kg of flour two weeks ago, 10lb of potatoes today) with any eye to another lock-down, while simultaneously trying to drop my weekly grocery bill down to $25. Which… ask me how well that’s going. I’m trying to keep a hard lid on my “must stock up NOW” feelings when it comes to “specialty” items like oat flour, dried cranberries, and walnuts.

If I look back to six months ago, though, it was Full Moon in Libra, and we had just found the place we moved into a scant month later. The place where we live now. It was a big indicator that I could get significant, goal-oriented magic to work, and it was a period where I was trying to get my glamour practice up and working again (a constant renewal, tbh – I wore eye shadow for the first time in two months today). But it was also a period where there was a lot of change (which I’m not great at handling, even under really good circumstances) happening and a bit of an internal battle going on between grief and hope.

To try and answer Chani’s question:
I’ve built the beginnings of a place in this new neighbourhood, and developed the beginnings of a “brand” for my Office Goddess remote freelance admin/editing/transcription/marketing work.
I can’t say I’ve healed much of anything, but I’m doing shadow work around money stuff and continuing the work of balancing (ha… because Libra Season) all three of my lower chakras.
I have no idea if I’ve managed to deepen my relationship with my Fetch, let alone my GodSelf, but I’ve been attending (virtual) group rituals, which feels a bit like deepening my practice, and I’ve tried to make a good, if preliminary, connection with the new patch of ground that I’m living on, and the house I’m living in, which matters too.

Chani’s horoscope for Scorpios (my Sun sign) suggests that it’s worth doing a retrospective/check-in about any ongoing project and/or career to see (and consider) what I may have learned over the past six months (I mean, see above re: Office Goddess, but also: I landed a grant during the past six month, and I’m getting paid to finish my first full-length poetry manuscript, so), while offering a reminder that “What heals you wants to remain close to you. What calms you carries you forward in ways that are unimaginably helpful so seek them regularly” which… when I’m stressed, I tend to treat myself like crap, so this is a relevant thing to keep in mind (now and pretty much always).

She also points out that “The proof is always in the pudding, but no matter the goals achieved, the process has been potent, and its aim has always been your evolution. Getting things done is satisfying, but getting a sense of the potential of your powers is life-altering” while pointing out that Scorpios’ witchy powers are riding high, even before we hit actual Scorpio Season, so it would behoove me, I suspect, to do some magical workings over the next couple of weeks – like shedding/releasing on the 15th and 16th during the last dregs of the waning Harvest Moon, or doing prosperity-and-abundance magic on the 11th when the Sun hooks up neatly with Jupiter. 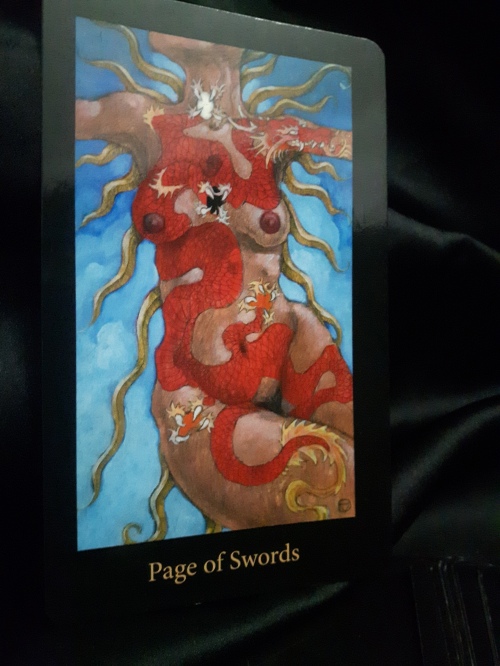 The cards I pulled, then, for the New and Full Leaf Moons were the Fool and the Five of Water, respectively. Like I said, I was sliding back and forth between hope and grief.
Six months later, as we slide on through the Season of the Witch, I pulled the Page of Swords.

Much like Chani’s advice to Cancers (my Moon sign) at this time, this card is a reminder to “remember your influence”. Rather like Liz Worth, who’s advice for Libra Season is to dial it in and decide exactly where you need – and WANT – to put your power and your energy right now, it’s a card that says “be prepared to make important decisions quickly” AND a card that says “speak your truth”. More accurately, perhaps, given Cristy C Road’s description of this card as “The Home of Action”, it’s calling to mind those witchy powers, and the reality that:

I speak my truth. I use my words, my breath, my voice, my song to work my will and manifest it in this beautiful world.

Movement: Moon Salutations, walks around the neighbourhood and out to the library, squats and related exercises. Not nearly enough dancing though!

Attention: Nesting – filling my freezer, trying to get on top of the CSA veggies before they get past their best, digging out my picture nails and finally getting the art onto our walls, investing in a new set of bed sheets. Glamour – which, in some ways, is like “body nesting” (I don’t know if that sounds cozy or creepy… but that’s my Cancer/Scorpio Black Swan to a tea, so…). Washing my hair with baking soda and cider vinegar as some kind of a pre-winter detox for my scalp. Wearing makeup for the first time in ages. Skin-brushing. Remembering to moisturize. Digging out my crow skull pendant, pentacle earrings, and other Goth AF accessories, just because it’s leather weather and I want to. Remembering to drink my mint-and-licorice teas and say my magical words. Topping up my offerings. Trying to do things Mindfully and With Intention.

Inspiration: tarot (for ever!), new books on witchcraft and spiriual kink, #gothtober, my growing collection of (mostly) fish vertebrae, and the abundance of gourds that have begun turning up in my CSA box and at local grocery stores.

This entry was posted in Uncategorized. Bookmark the permalink.