A lit tealight in a glass holder casting a shadow onto a wooden floor. Courtesy of Wiki Free Images.

I start a new job on Tuesday. Which brings me to three religious institutions and, technically, four jobs. I’m nervous – not the least of why being that I’m doing in-person training, which is not Ideal under current circumstances – and concerned about my own rather-rusty time-management skills, but I’m looking forward to learning new things and, more to the point, making enough extra money that I might actually accomplish the more physically-obvious goal of my King of Coins project.

So, woohoo, on that front.

Which, PS: Yeah, I’m doing another NYNY project, if you missed that memo. 😉

We’re getting ready for Midwinter here. The temperature has been going up and down – a lot of above-freezing weather, a lot of rain, some snow – but it’s due to drop hard by Monday. I have baking to do, low-budget mead to keep an eye on, and a LOT of cards to get into the mail.

It seems more of a Thing to do cards this year. I like doing them, but I’ve added a lot of people to my list who, in a different year – when we weren’t all Physically Distancing, when I was still down the street from a lot of them – I would have just visited in person or had over to the house. I suspect a lot of them aren’t going to get to their destination until nearly January, but they are something that people can hold in their hands, and that feels important right now.

Two years ago, at this end of the year, I had tonnes of time on my hands. time that I used to do a five part series looking at the “shadow” side of Midwinter through the lens of the major arcana. A year ago, I was two thirds of the way through my Empress Project and had just, just landed a remote desk job (my first of what is now a growing list). I wasn’t blogging nearly as much as I had been the year before. This year, I’m Mostly Working, making bank – thank you ALL the gods – by my slim standards at least, and making a point of coming out of the office in the evenings to spend some time with my wife, because that’s important too. I’m still making time for writing (thank goodness – I’m actively worried that I’ll lose touch with that as my workload increases, but I don’t want to and I need to remember to make time for it in a reliable way).

So. I was talking about the King Of Coins Project. Another year of Radical, Magical Transformation to try and make myself a better, more personally (and cosmically) empowered Self.

3amTarot, over on instagram, did a spread for Doing The Damn Thing. And I gave it a whirl.

While I was shuffling, I thought “I can’t even think what The Damn Thing would be at this point” and, right then, what fell out of my deck but Transformation.

A fear or frustration that’s holding me back: The heirophant / No-Thingness

A reminder of a strength or talent I possess: Six of Fire / Success

A good thing that could emerge on the other side: The Page of Air / Mind

My context cards were Postponement (the Four of Air as my summary/advisor), Ordinariness (The Eight of Earth as my Overarching influence), and Beyond Illusion (Judgement/the 20 of the Major Arcana, as my Underlying influence).

So what do I do with this? Am I afraid of my own potential? (…yes?) Might a new way of thinking or understanding be a likely Good Thing from undergoing the kind of transformation that I want to do through this Project? YEAH. Are major breakthroughs (Beyond Illusion) generally a journey of a zillion mundane-seeming steps? Yup. Is it time to Do The Damn Thing and level-up my brain in terms of abundance and various personal/emotional freedoms? Yes, it definitely is. (I’m freaking forty. I’m tired as heck of feeling anxious at the end of the month while working multiple jobs in a multi-income household, and I’m sick of feeling BAD about myself when I don’t know how to shop for my significantly-wealthier-than-me relatives. Time for all this stuff to change).

Am I deeply underwhelmed at the thought of spending the next two weeks slowly-but-surely getting things tidied and cleaned around here? Or having to reign it in with the seriously reckless way I’ve been throwing money at gifts, personal goodies, and fancy food for the past two months? …Also yes. (At least I’ve been paying cash, by and large, rather than adding to my credit card debt, but here we are).

I used a random tarot card generator for my tarot card meditation draw, this time around, and the card I got was The World. 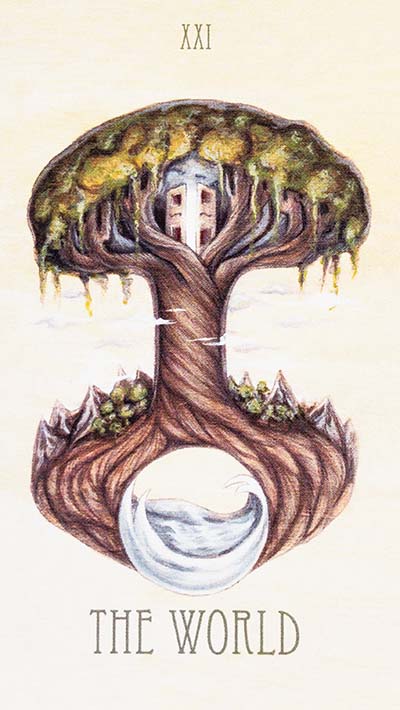 “The World card represents triumph. Everything has come together and you’re now achieving success,” and touches on both remote work (work that you can do anywhere, from any location) and on internal things like being confident and acknowledging your own skills and know-how. It fits well with the elements of the King of Coins that I want to be working with and internalizing/evoking.

And it’s also a really great message to get from The World Herself, tbh, and a lovely reminder to carry with me as I move towards 2021 and start my next year of radical magical transformation.

Movement: Ha-haaaaaaaaaaaa. I have been keeping up with my Moon Salutations every night, which is a good thing. And getting out for walks in the woods, too. But I need to make a point of dancing up a storm at the next Stay Homo virtual dance party, especially since the impending temperature drop and corresponding icy conditions aren’t exactly going to be making the great outdoors look appealing any time soon.

Attention: TBH, I’ve been paying a lot of attention to my schedule. My to-do-list is now colour-coded to help me keep track of everything. O.O

Inspiration: Approximately a million years ago – aka the beginning of this pandemic – I placed a book order with a local queer-run sex-positive business. It FINALLY arrived (relax – there were a lot of special orders) about a week ago, which means I have a tonne of new books – mostly queer femme poetry, some sexuality and interdependence – to page through when I’m not eye-ball deep in ritual planning, library books, and video editing. But even just scanning the tables of contents is making me excited for poetry again!

This entry was posted in Uncategorized and tagged King of Coins Project, Lunar Cycles, tarot, wheel of the year. Bookmark the permalink.