Well, the serviceberries were ready to be harvested as of yesterday, if not slightly earlier. Say hello to two weeks of fresh, delicious berries, folks! 😀
END_OF_DOCUMENT_TOKEN_TO_BE_REPLACED

Technically the full moon isn’t until tomorrow, but this is running through my head so I’m posting it now. Who knew? A Lunar Cycles post that’s come up early! O.O
END_OF_DOCUMENT_TOKEN_TO_BE_REPLACED

Posted in All About Me, Wheel of the Year

So, for those of you (most of you, I suspect) who don’t know: My dad is one of the many folks who’s died of pancreatic cancer. He got diagnosed in August of 1999, and died the following February. Which is about a month later than we were expecting, once the diagnosis happened. The disease works pretty damn fast, is what I’m saying.

Anyway, it was almost 14 years ago, so I’m not deep in the grieving process at this point and, honestly, I know he turns up in spirit-form every so often (if not more frequently) to check up on me, so I know he’s not really “gone-gone”. It’s just that his body isn’t a physical one anymore.

One of my aunt’s brothers-in-law (I never knew him) also died from pancreatic cancer, about five or six years later. I wound up doing a CD for the funeral (three pieces: “Angel” and “I will Remember You” by Sarah McLachlin, plus an accapella rendition of “Amazing Grace”) so that I could sing at it long-distance.

What I’m saying is that my family is linked to pancreatic cancer in a fairly personal way.

And so now my mom works for Pancreatic Cancer Canada. A pretty decent place, by all accounts.

Anyway. Part of what PanCan Canada does is they raise money for (specifically pancreatic) cancer research. They do this in a bunch of ways, but one of them is through their “shop purple” store, which is part online shop[1] and part pop-up store (they bring their stuff to events, that sort of thing). The idea is that you buy the Purple Stuff (thus getting something concrete in exchange for your cancer research donation) and then, when people go “Where did you get that awesome ________________?” you can use it as a jumping off point to do some educational outreach and general awareness-raising about pancreatic cancer[2].

So, to get to the rather me-me-me point of this post: As you all know, I make jewelry.

I recently made a bunch of jewelry for Pancreatic Cancer Canada to sell in their shop. I do get paid for the pieces, but I’m donating my labour on these. According to Mom, each piece will go up on the site at a different time. Right now, the one they have up is this one: 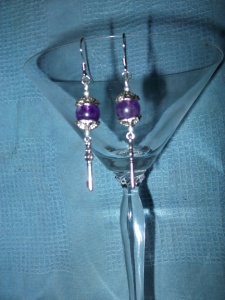 Key to the Cure
Piece A
Seven pairs available, but that’s it.
8mm amethyst beads + surgical steel hooks and silver-tone findings.
1.75″ long, not including hooks. $20/pair.
Click on the picture to go to their shop.

As it says in the caption:
8mm amethyst beads + surgical steel hooks and silver-tone key-charms and findings.
1.75″ long, not including hooks. $20/pair.
Available from Pancreatic Cancer Canada.


[1] It’s not exactly an online shop. You can see what they have on the webpage, and then you have phone in what you’d like to order. I’m pretty sure it’s a project of theirs to update the “store” section so that you can just click and do an automatic check-out or similar. I hope that this happens, soon. 😉

[2] That’s one of the many, many things that I loathe about the whole “pink washing” thing. Stuff gets done or sold or bought ostensibly because it’s “raising awareness” about breast cancer but… It’s really not. There’s no coversation-starter built into, say, the pre-sliced mushrooms at the grocery store that come in the pink plastic tray rather than the blue one. At least my mom’s org does stuff to go along with what they’re selling. (Like their Purple Lights awareness campaign, that involved getting various municipal landmarks across Canada to light up in purple, complete with press-conferences, in conjuntion with selling purple LED outdoor fairy lights to people in their shop). Anyway. It’s a bit of a thing. Don’t mind me.

Posted in All About Me, Ancestors, Crafting

Further Adventures in Felting Soap! This Time In Pictures! :-D

Okay. So I’ve been spending a LOT of time at the fibre store of late.
I know.
Basically, I’ve come to the conclusion that I Make Crafts because it’s a creative addiction and I don’t think I could actually stop Making Stuff[1] even if I wanted to, and boy-howdy do I ever not want to.
So that’s where I’m at.
And the latest thing I’ve been making – or making stuff with – is felt. I made myself a felted bracelet for the first time yesterday (and am part-way through a second one, though I may have to start that one over again… we shall see…), am trying my hand at another pair of felted earrings, and have been doing more work on felted soaps.

See, I’ve talked before about how I can use felting to (a) hold scent, and (b) make my soaps more beautiful and eye-catching and, er, easier to tell apart on sight (I don’t add dyes to my soaps, so they tent to be a uniform shade of butter-cream, no matter what they smell like).

I’ve felted a batch of Squeaky Clean (unscented) soap using – what else – undyed merino roving (a mix of natural off-white, dun, and charcoal… more or less), and a bunch of Pomander (sweet orange, vanilla, clove) wrapped in two shades of orange corriedale, plus a couple of bars of Winter Solstice (peppermint juniper cinnamon) in mostly turquoise and white corriedale plus some whisps of spruce and cranberry thrown in as well.

So here’s My Process (so far) in pictures:

Pomander soap wrapped in corriedale roving, and ready to go into its boiling water bath.

Squeaky Clean soap felted with natural-coloured (undyed, unbleached) merino. I wrapped six bars in a washing-machine “delicates bag” rather than cooking another stocking. We’ll see how it goes.

Squeaky Clean soap felted with natural-coloured (undyed, unbleached) merino, and sitting on the draining rack for Stage One of drying. Sometimes I think I should be sitting these in an oven on low heat or something to make sure everything dries evenly.

Winter Solstice soap felted in a combination of ice blue and ( snow) white corriedale with added whisps of cranberry and spruce corriedale for accent colours. These two have been drying since yesterday.
(I may need to go back to the Use A Stocking method, since it seems to get the felt to, well, felt a little bit better. It’s a learning process).

So there you have it.
What I’ve been up to today. (Stay tuned – once I’ve got it beaded, I’ll post pictures of my felted bracelet — it’s a rather pretty asymetrical piece that – possibly because of the abalone-shell flowers I’ve already sewn to it, or possibly because of its slightly ruffled upper/outer edge – makes me think of Russian Kokoshniki. My next one – maybe – is going to be a cuff. Or it’s going to be a similar ruffly thing, but done more like one of these.


[1] Whether “stuff” is poetry or soap, fiction or candles, handspun yarn or fancy dinners, felted bracelets or fruit butter, knitted shawls or yoghurt, beeswax candles or beaded jewelry, home-grown squash or improvized harmonies or even colaborative art through my work as a model… I feel most happy, and most myself, when I’m Making Stuff. 😉

More on the Crafting Front (I made hair sticks!)

Well, if this isn’t a sign of Autumn, I don’t know what is.
I bought yarn today.
Hoy.
Two skeins of green (one “heather” and one veriagated with yellows and browns and similar) with-which – combined with various other greens of these ilks – I shall (finally) make my lovely wife a hat.
Hat! 😀
Good thing she’s out for the evening, yes? 😉
END_OF_DOCUMENT_TOKEN_TO_BE_REPLACED

So I’m trying my hand at felted soap again.
I’m using a very well-cured bar of lemongrass-ginger soap (tallow-based, as it happens. I’ll use tallow, lard, and similar for home-use soaps, but not typically for soaps that I sell at craft shows. I find that it squicks people out a little bit) and have wrapped it in some of my roving – here I’m using silk-merino (the lighter peach/amber) and coridale (the darker orange/rust).

Lemongrass and ginger soap, wrapped in silk-merino and coridale roving.

END_OF_DOCUMENT_TOKEN_TO_BE_REPLACED

Hey!
So it’s time to write about canning, cooking, and creativity again!

A friend of mine has a couple of apple trees, so she’s been sending me apples (like: 10-15 kilograms of apples) which, over the course of (mostly) this weekend, I’ve turned into 16 one-cup jars of apple butter.
I’m rather pleased with this, particularly since it’s actually a little bit more than that (I could probably fill another half-cup jar, but I’m not sure. I may just use what’s left to top up the already-open jar in the fridge).

Guess what the relatives are getting in their Xmas Goodie Baskets this year? 😉

END_OF_DOCUMENT_TOKEN_TO_BE_REPLACED

It was slightly touch-and-go there, for a few days, because my table fee hadn’t arrived in the mail yet, BUT I found out yesterday (!!!) that I do have table-space at the Magical Forest Yule Holiday Craft Show after all. Thank all the gods! 😀

In addition to my lovely earring collections, I’ll also be bringing a sellectiohn of pendants PLUS a big basket of 1oz 100%-beeswax tealights ($1 each OR 12 for $10); my 3oz 100%-beeswax votives ($12 for an already-wrapped gift-pack of four), both of which are prepared in metal (reusable/recyclable, petrolium-free) containers; and my usual soaps (unscented, pomander, and winter solstice) and deliciously-scented fizzing bath treats (Elizabeth’s Cookies, Gingersnaps, and Chocolate Chip – not actually edible, just smell like they are).

So I’m working on new photos for Amazon Creations (my Etsy store). I’m a little nervous about it for a couple of reasons, all of which boil down to “I’m not actually a photographer”.

See, I have the good fortune of being extended-phamily with a Real Photographer. One who happens to want to learn how to do promotional jewelry photography, so that she can offer it as a service to places like Ten Thousand Villages (where she volunteers on a regular basis). So she offered to take pictures of a bunch of my jewelry.
As in: every single piece listed in my store, plus about half a dozen more… plus pictures of the pieces from those collections that have sold at craft fairs or off the site already.
That’s something like forty professional pictures that I got for the bargain price of “Thanks, hon, you’re awesome!”

And now I’m on my own.
On the one hand, this is a good thing, because it means I’m learning a new skill set and I’m not dependant on someone else’s availability/free-time to get pictures of new stock. Which is handy.
However, it does mean that I’m going from professional-quality pictures to, well, MY quality pictures. I may be awesome in front of a camera but… Behind it? Well, that remains to be seen.
Using a tripod (to prevent hand-tremble issues) seems to be helping.
Here’s hoping I get some good pictures of my Honey Month collection, and of the various wintery pieces (made especially for this weekend’s Yule Craft Fair) and Mythical Realms key necklaces (yes, I’ve started making necklaces again, and this time they’re actually working!) that I’ve been creating as well. My goal is to have enough pictures to keep me in regular Etsy updates until the end of February.