New Year New You 2018 – Week Seven: Glamour Magic is A Love Letter To My Body

Instructions: “This week, I would like you to think about how you’re presenting yourself to the world and how that’s affecting your own personal goals“. 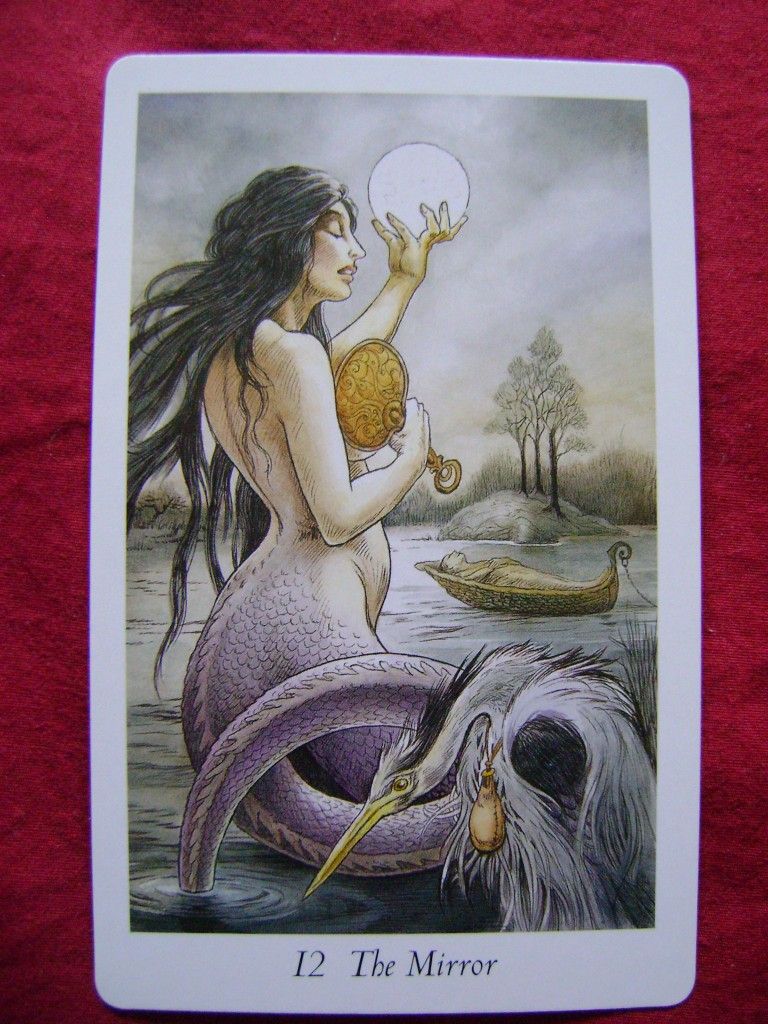 A Lady of the Lake figure, with the torso of a human woman and the legs and tail of something more reptilian, holds a mirror in one hand and the full moon in the other. There is a great blue heron, wearing an amulet, in the foreground. In the background, a small boat carries a shrouded figure (possibly a corpse). Further back, is a very small island that appears to have a door in the side.
In the Wildwood Tarot, the Twelfth card of the Major Arcana is called “The Mirror”. More traditionally, it’s The Hanged Man.

Tarot Card: The Mirror.
I chose this card from this deck specifically because of the “mirror” name. We are talking glamoury and self-presentation, after all.
Elsewhere, the Hanged Man has been named everything from Intermission to New Vision, and they are all at least a little bit relevant. They all involve changes of perspective. They all involve pausing to reflect.
What I think is really interesting, though, is that The Hanged Man has connotations of being open, being vulnerable. I wasn’t expecting that. (I mean, I suppose if you’re literally hanging by your ankle, that’s a pretty vulnerable position to be in, but it still came as a surprise). And there’s a fair bit of that in glamoury. It’s not a mask. It’s not a false front. It’s you, shined up and gleaming and refusing to compartmentalize yourself for anybody else’s comfort. It’s you being your own velvet rope.

I have to admit that, after (putting off) last week’s prompt, I’m finding Week Six to be weirdly easy? Like for the first time ever (I’ve done this Experiment a number of times at this point) I’m not going into The Glamour Prompt feeling defensive or otherwise dreading it. Maybe because I’ve been doing deliberate glamour magic for something like 8 months now, or because I’m feeling a little more solid around stuff like “dressing your age” when I want and need it to mean something other than “dress like someone who works as an office admin” (even when I do, periodically, work as an office admin… and find myself woefully under-prepared in the clothes department for anything more than about a two-day contract).
Regardless, when I clicked on the prompt to remind myself what it was? I was relieved. Like “Oh. Glamour. Got it covered!”
And, on some levels, I do. My bras fit. I know how to mend my own socks and make/modify my own clothes (so they fit). I’m getting better at contouring/highlighting. I’m dressing with a certain degree of intention. I went back to dying my hair “bisexual burgundy” because I missed it and, even having done a pretty spotty job of it, I’m really happy to have “my” hair back. (This is what happens when you notice how many red-heads are in your personal Glamour Glossary and then land en excuse to go back to your power colour). I started (very recently) doing daily bendy-stretchy exercises to complement my preexisting core-strengthening exercises, and incorporating affirmations-as-spell-craft into the whole routine, in the interest of being – ha – open (and vulnerable) to everything from hot pick-up sex to the possibility that unexpected changes are not only not the end of the world, but might actually be positive. I described my own body, a week ago, as gorgeous and lovable.
Which I guess brings me to:

One of Ms Sugar’s suggestions was to write a love-letter to your own body. So I did.

I love that our ears can pick up a tune, even if they can’t pick up the thread of a specific conversation.
I love our capacity for pleasure, even when our brain-side has a really hard time allowing us to get there and go there, especially with a sexual partner, especially while bottoming. I love that we’re capable of letting go like that. Of roaring and laughing, of coming hard and gushing. I love that we KNOW this, even if we can’t do it reliably (yet).

I love that we can breathe easily. That we don’t have to hunt for fragrance-free everything, and can enjoy heavily scented perfume oils and massage bars and bath bombs. I love that we’re aware of what working in that factory did to us, and that standing over a pot of melted paraffin may give us headaches now, but that we can make beeswax candles from scratch instead, which is what we like anyway. I love our lung capacity, the ways we navigate having a cleft palate and the mouth/nose/throat issues that’s given us our whole life.

Glamour(y) and Loving Your “Look”

This is not the first time I’ve tried to write this post. It also feels kind of weird to be posting it here since I’m talking about appearances and What They Mean – and that’s more in keeping with the themes I get into on Syrens than it is to Urban Meliad. Still, let’s dive in, shall we?

Miss Sugar has a New Year New You prompt about “Glamour and You” from weeks ago and, every time I try to respond to it, I end up complaining about social expectations of body shape (I have a hips-to-waist-ratio that would make Marilyn blush but which, in the last 15-25 years has basically been on the “non-existent” list – clothes are built for nubile, boyish bodies or they’re built for post-babies brick-shaped bodies, and either way, my bone-structure is read as having disappeared with the 1950s) and how hard it is to find affordable shoes when you are (a) broke, and (b) very tall – in a “closer to 6’6″ than 5’11” by a considerable margin” kind of way. Or else I end up spending three hours drooling over boots and shoes and even socks that I can’t afford and wish that I could.

The closest thing I’ve written to adressing Glamour(y) is my NYNY Prompt Response to Things I Hate Doing, where I talked about taking the time to do makeup, shave my legs, and wear perfume (Hi, I’m Femme. Nice to meet you) in order to make myself feel more powerful and more myself and so on.
And that stuff does work. I’ve been doing it of late in an effort to rock my awesome in a way that is visible to the unknowing eye.

But trying to write a post about it – at least trying to write a post about it here rather than on my more personal, deliberately-limitted-readership, blog – always leaves me feeling like I’m being a Bad Earth Mama. Like caring about Appearances and, more to the point, wanting to present a certain Look to the world[1] means I’m shallow and materialistic and bourgoise and self-absorbed – even when, as a totally-freelance Everything-er (model, singer, poet, pornographer, tarot-reader, crafter, event-planner, blogger, outreach-worker), I need to project “cool-and-collected” and “cool-as-in-awesome”, “sexy and mysterious” and “approachable and friendly”, ” “fey, bohemian artist” and “down-to-earth, competent” “non-threatening and accomodating” and “in-charge and calling all the shots”; Even when, in some of those situations, it’s actually part of my job-description to care about that stuff.

So. Let’s take a different tactic.

What is Glamour(y)?
Glamoury is the art and craft of making people see you the way you want them to see you. And I find that most people don’t know how to do that. Like what I was talking about, above, we get tangled up in the “personality trates” we associate with certain Looks[2] – including the looks we already present[3] – and the advice offered in magazines (like, haha, Glamour) are more about how to present the look Other People (“men”, “women”, various cosmetics companies, Sean John, etc) want you to look like, than getting said Other People to see you the way you want to be seen.
Meaning that there isn’t necessarily a lot of “help” out there if you don’t already know (a) how you want people to see you, (b) how that matches up with the look you’re actually presenting[4], and – most importantly – (c) how to get there from where you’re at.

Miss Sugar asks us “In [your] New World Order, how will you LOOK like your Best Self?”
I remember trying to figure that one out around this time of year in 2009 – when I’d been out of Retail for a year, and was reading my poetry (at open mics) around town, and was trying to figure out what My Style was when I wasn’t at my temp job.
At the time, “neo-burlesque librarian dominatrix with a side-order of all-natural fibres” was probably my best guess – and, by and large, it still is – for where to aim so that my work-a-day clothes were/are (a) me, (b) comfortable, and (c) aesthetically pleasing.
More to the point, aiming for this lets me take my “dressing like myself” clothes into an office-type environment and “look professional” while hinting strongly at my actual reality.

(You knew that was coming, didn’t you?)

But: Since I am trying to distance myself from “office environment” type work (not that I won’t take it if I need it, but a big part of the point of this Experiment, for me, is to NOT need it), I would like to be pulling my day-to-day (non-bathrobe-based) Look somewhat further into the Dita Von Teese meets leather femme meets Emilie Autumn spectrum.
And, granted, right now I feel awkward just wearing fishnets on an ordinary day. So I have a ways to go in this vein – including learning how to do my own hair in easy-but-elaborate-looking ways, finding some proabably-pinup-inspired lingerie that fits and flatters my figure, and figuring out how to add Glitter Goth to my appearance without looking like a refugee from my own early twenties – but that’s kind of where I’m aiming.

[1] And wanting to drop close to a grand on the shoes, boots, and vintage-pin-up-inspired cotton dresses – not to mention perfume and potentially jewelry – that would get me to a point where presenting that look is easy – as easy as grabbing something clean out of the closet and throwing on my shoes before I leave the house.

[2] think of the Geek who “doesn’t care about clothes” because caring about clothes is for herd-following trendies (or whatever), but who actually cares about clothes a lot – and, as such, makes a point of wearing jeans, sneakers, and the t-shirts that announce his (or her) fanish aliegences, gaming preferences, and con history.

[3] I got a haircut in 2007, after not having cut my hair in more than 10 years. Every time I looked in the mirror, I’d see my actually-quite-awesome super-long-layers haircut and go “I have ‘Beyonce Hair‘. Boo.” because I felt like the look I was presenting had gone from “Obviously Pagan Countercultural Chick, Badly Disguised in Corporate Drag” (my hair had been below my waist, pre-cut) to “Gangly Chick in Ill-Fitting Suit, Trying to Redeem Bad Look with Trendy Hair”. Or similar.

[4] The number of pictures of me in high school where I was trying to look like this but fell so short of the mark that this cartoon looks considerably better and more put-together than I did… Oh, dear…

Posted in All About Me, Better Living Through Radical Magical Transformation